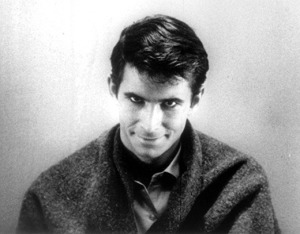 Tonight, after a dinner at the Public House, Michael and I headed to Erie’s Warner Theater on 8th street to watch Alfred Hitchcock’s Psycho on the big screen while the Erie Chamber Orchestra sat under the screen, playing the score.  The experience was phenomenal.  Watching musicians play the opening score while credits splashed across the screen was so exhilarating I got chills.  Of course, one pivotal musical moment happens during the infamous shower scene, but the music was similarly arresting when the last remains of Marian’s car sink under the swamp, and when “Mrs. Bates” turns around, and we see her “in the flesh.”  (Or, if I may, in the lack of flesh).  In fact, I never realized how beautiful Psycho’s score was until I saw it produced by a live orchestra.

As a sidenote, a theatrical viewing of this film is a must-do if you stumble upon the opportunity.  I was compelled by the scenes people laughed at.  For example, when Norman Bates is trying to hide the evidence by pushing Marian’s car in the swamp, and the top of the car lingers above the surface for a while, a breeze of chuckling wafted through the auditorium.  I had never viewed the scene as funny, and realizing that others saw the humor in the situation had two effects: first, it made me realize a new level of dark humor innate in Hitchcock’s film.  Second, it made me realize that there exist people with darker senses of humor than me, which is comforting for a girl with a proclivity toward the macabre.  Halloween costumes didn’t abound, but they appeared, and in general I got the warm feeling that I was among like-minded friends at this event.

One character struck me, though, and that character was Norman Bates.  Well, of course Norman Bates struck me.  He’s the most intriguing character in the movie.  In fact, Michael asked, jokingly, after the film, if Anthony Perkins received an Oscar for his performance.  You laugh, but I wouldn’t be surprised if actors have received awards for less.  Perkins is brilliant, and especially brilliant at being awkward.  How is it that Norman Bates is so creepy, but, well, in a twisted way, so likeable?

One realization struck me as I was listening to his history unfold, vis a vis the knowing psychiatrist at the film’s conclusion.  And the realization continues to nag me.  Norman Bates may be many things – eccentric, murderous, pathological, awkward, scheming – but Norman Bates is not evil.  This got me thinking.  Horror, as a genre, exposes us to the darkest realm of existence.  That’s part of the reason I’m attracted to it, though I’m not sure what attracts me to the darkness.  But how much of this darkness stems from evil, as opposed to sickness, selfishness, and general human folly?  How many characters in horror novels, shows, and films are truly evil?  How many people are truly evil?

I became fascinated with evil, as its own, distinct concept, this past January, when I read Terry Eagleton’s book, On Evil.  I was browsing the philosophy section of Barnes and Noble when two things struck me.  One, that Terry Eagleton, known in the literature circle as a renowned Marxist critic, had recently published a book.  Two, that he combined philosophy and a critical analysis of famous literary texts to define evil.  I had just finished reading Stephen King’s Pet Sematary, so my mind was already in a dark place, but it was seeking something more academic for a new read.  The book is interesting.  I appreciated the philosophical meanderings more than the literary analysis.  But what stuck with me most were the parameters Terry Eagleton placed on “being evil.”  To be evil is not to commit harmful, even malicious acts.  To be evil is to commit harmful, malicious acts when you have no end in mind and no particular motivation, when you’re committing such acts purely for the pleasure of “watching the world burn,” as Alfred tells Bruce Wayne in The Dark Knight.

By this rationale, Norman Bates was never evil.  He felt a connection to his mother that was too human to be evil, but too pathological to be healthy, which gave him a motive for killing his mother and her lover.  His own inability to cope with his actions further underscores the fact that he’s not evil.  He’s so unable to cope with his own actions that his personality splits.  Norman Bates killed his mother and her lover because he was possessive, jealous, and probably pathologically connected to his mother – sick, to an extent.  And Norman Bates killed Marian because his previous actions made him very sick.  But Norman Bates was never evil.  And Perkins does an excellent job conveying this.  Perkins plays a character who is eccentric, isolated, even unsettling, but who isn’t insidious.

Let’s take the word “insidious” and run with it, for a minute.  In the film Insidious spirits from the realm of the dead are trying to pass through the barrier between life and death by inhabiting a living person’s body.  Despite the pesky nature of said spirits – nobody likes to be possessed, or to watch their loved ones undergo possession – the spirits are not really insidious, at all.  They have a clear end in mind.  Because they are unhappy and isolated in the world of death, they prey on the bodies of the living, to try to re-enter the world of the living.  In ancient Greek mythology, heroes are sent to the Elysian fields, but even the Elysian fields are subpar compared to life on earth, because the ancient Greeks believed that nothing in death could be as fulfilling as life in the living world.  The spirits in Insidious feel this poignantly, so they very understandably yearn to inhabit living flesh.  Really, there is nothing insidious about Insidious.  But, if the director had chosen the name “sad spirits” for the movie, it may have attracted a much different audience, if it attracted an audience at all.

I think we could deconstruct a lot of horror films and find that there’s no evil at the bottom of the mayhem.  Ironically, I think a prime example of evil is Heath Ledger’s depiction of the Joker in The Dark Knight.  The Joker has no reason for being evil – he makes up a sad backstory about an abusive father, but later laughs at the fact that he made the story up – and he has no aim.  He simply wants to watch people suffer and die, wants to “watch the world burn,” and wants to force Batman to commit evil deeds.

What about exorcist movies?  Do these movies depict pure evil?  When the devil possesses a human being, doesn’t the devil just want to hurt that person, with no end?  I think so, but I’m not sure.  Extra-biblical stories tell us that Lucifer suffered the sin of pride, and wanted to be like God, so he gathered other angels who were tired of serving God and they joined him and provoked a rebellion against God.  But this rebellion has a clear end: Lucifer was not creating mischief for mischief’s sake; he desired power.  And if his evil actions – a rebellion against God – have an end or a purpose, then they are not really evil.  So, the devil possesses one of God’s creatures because the devil is still mad at God for being sent down to hell.  Possession becomes a crime of vengeance and passion, not an act of evil.  Which raises the question: where do we see evil in horror?

Perhaps places can be evil, but people cannot.  The Overlook Hotel drives people crazy and kills people for the sake of killing.  Of course, it was built on an Indian Burial Ground.  And the Micmac burial grounds beyond the Pet Sematary certainly perform evil feats.  I probably need not mention explicitly that the horror genre likes to credit Native American culture with evil, but I had to point it out.  Supernatural entities can be evil, too, at least in the case of Sinister’s Baghuul, who forces children to kill their families ostensibly for the sake of killing, then steals their souls.  The movie provides us with no motivation that he has for doing this.  It seems then, in horror, it may be far easier to find evil places or evil things than evil people.  .

I’m hoping you can answer some questions.  How do you define “evil?”  What infamous horror stars and villains are evil, and which ones are selfish, angry, or some combination of sick and psychotic?  Are there better embodiments of evil than Heath Ledger’s Joker in The Dark Knight?  I’d love to hear your thoughts!

Like Loading...
We All Go a Little Mad Sometimes: Examining Evil, Psychosis, and Human Error in Psycho and Other Films

41 thoughts on “We All Go a Little Mad Sometimes: Examining Evil, Psychosis, and Human Error in Psycho and Other Films”