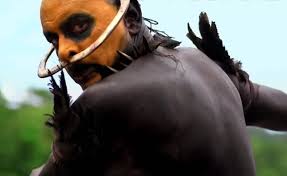 The 1980’s was a decade for crazes.  There was hair metal.  There were leggings.  There was crimped hair and the arrival of Saved by the Bell, which would reach its peak in the 90’s but aired its first episode in 1989.  There were sweat bands, hammer pants, early rap, both bangle bracelets and The Bangles, who were always burning their eternal flames while they told us to walk like an Egyptian.  But Egypt was not the only culture that interested us in the 80’s.  In the horror genre, which often borrows from non-Western culture to create its evil deities — writers became fascinated by the Ancient Indian Burial ground.  The Ancient Indian burial became something of a default-fallback.  Want to depict evil?  Need to attribute evil to something?  Why not say it was an Ancient Indian Burial ground?  You know, those crazy natives, they’re always stirring up trouble.

The answer seems simple enough.  As Americans, we have a history of “otherizing” members of non-Western culture, of seeing certain groups of people as inherently different, and inherently lesser, than ourselves.  Because we perceive certain cultures to differ vastly from ours, we shroud them with an aura of mystery and imagine them committing all sorts of crazy acts.  We exoticize them, and non-members of Western culture become the exotic others.  “Old school” anthropology – think late 19th and early 20th centuries – alienated these groups by studying them as objects and deeming them lesser in value than those of “our own kind.”  Pink Floyd sings a song that would be a good response: “Us, and them, and after all we’re only ordinary men.  Me, and you, God only knows it’s not what we would choose to do.”  Our “us and them” mentality, toward native Americans and those we deemed distinctly separate from Western Culture, amplified a mistrust that we’d been fostering since we settled in America, spread illness, and bombarded Native American land.  After all, if they weren’t the inherently different (and lesser, and not-to-be trusted) other, then we couldn’t justify ousting them from their rightful homes on this continent and cozily settling into their land as if it were our God-given right (which, of course, we thought it was).

I’m no history expert, but you don’t need to be and expert to know that the United States has a bloody and shameful past.  And situating the Ancient Indian Burial ground as cursed territory of sinister depravity that can have catastrophic effects on “the white man” seems like a lingering remnant of an antiquated mentality.  “They” are the other, and we fear “them.”  Indeed, they have potions and powers and spells beyond our Western, rational, scientific-method driven capability of understanding.  Pet Sematary would have hardly worked if the burial ground that caused the dead to walk were a burial ground built by Puritan Pilgrims; our predominant belief system, as a culture, is too close to Puritanism to see it as a root of evil, despite what the Salem Witch Trials might suggest.

I’m not decrying the use of the Ancient Indian Burial grounds in horror as malicious.  I’m just trying to unravel the mentality behind the fascination with fictional tribal spells.  Attributing a haunted building to the presence of an Ancient Indian Burial ground isn’t callous.  From a plot standpoint, though, it is arguably lazy.  I want a better explanation for why the Overlook Hotel is inherently evil, for why spirits steal a child in Poltergeist.  The 2000’s seem more fixated on ghosts from western culture, a fixation that has churned out a lot of terrifying horror (for instance, The Woman in Black.)

But our American fascination with the “bizarre other” doesn’t end in the 1980’s.  While many horror stories borrow other cultures’ deities and make them evil for a scary effect, Eli Roth takes an entire culture and makes it evil in The Green Inferno.  In The Green Inferno a group of activist college students travel to the Amazon, where they get lost and are captured by a remote tribal culture.  “The natives,” in the film are covered with red paint and ostentatious tribal jewelry, and they have one goal in mind: to consume the white man.  These cannibals aren’t just hungry; they’re malicious.  They frequently laugh at the pain of the movie’s main characters.

The Green Inferno is a gory, unapologetic bloodbath.  “The natives,” don’t just eat people: they tear limbs off living beings, poke eyes out, cook legs, and giggle while the victims scream.  If you think excess gore makes a horror movie innately better – and there are those who hold that view – then the Green Inferno is near-revolutionary.  I don’t place gore on a pedestal, and I’d rate The Green Inferno only as “so-so.”  But the film does raise some interesting questions.  Before we became more conscientious as a culture, we would call tribes like the one in The Green Inferno “primitive.”  Thomas Hobbes said that life in nature, without the accoutrements of “civilization” (quote-unquote) is “solitary, poor, nasty, brutish, and short,” a myth that anthropologists have been trying to debunk since anthropology revolutionized and became a largely conscientious, self-reflexive and pc discipline.  I had to wonder, when I saw the movie, if some of my dear old college anthropology professors would be cringing at Roth’s depiction of tribal culture.

Maybe Roth’s strategies weren’t so reprehensible.  After all, he’s not targeting a certain tribe.  However, most people in America don’t know much about distinct tribal cultures (myself included, and I minored in anthropology) –in the Amazon, or in other areas.  Thus, media depictions of the “tribal other” as an entity, become informative, whether or not we intend them to be.  Hannibal Lecter was one cannibal, and moviegoers see him as sick and twisted (albeit irresistibly intriguing at the same time).  To concoct an Amazonian tribe that eats people and laughs at their misery is to create a sick and twisted tribe, one that bears no resemblance, I’m sure, to reality. Similarly, in the semi-recent movie Pyramid, the Egyptian God, Anubis, becomes a formidable monster, which – though I’m no expert – bears no semblance to Egyptian theology.

If I sound moralistic, I’m not trying to be.  I’m merely identifying a trend in horror – depicting native tribes, in America or elsewhere, as bastions for magic, evil, or mayhem – emphasizing that yes, we do this, and pointing out the mindset underlying this trend.   But I don’t think it’s a stretch to suggest that such practices have implications.  Maybe your typical viewer won’t walk out of The Green Inferno assuming that all Amazonian tribe members are cannibals, but he or she might subconsciously think, “I bet that’s a strange area with strange people who do unusual things.  I wouldn’t want to go there.”  Such mindsets perpetuate the “us” and “them” mentality, the process not just of “otherizing” but of exoticizing the “other.”  Then, we become myopic at best, solipsistic at worst.  Unable to see mankind as a complex, interwoven web, we see ourselves as separate entities, distinct from and threatened by “those weird people over there who do strange things that we don’t understand.”  Such categorization fosters ignorance: we place the “other” in a category and discard any possibility of learning more about them, because the label “different” will do well enough and closes the conversation.

But I can’t lie: despite my qualms with The Green Inferno, The Shining is easily my favorite horror movie and might be my favorite movie.  Period.  And I wrote a piece on this blog defending the merit of Pet Sematary.  What do I with this horror trend, as a horror lover and conscientious objector?  I certainly won’t turn my back on what I love, but I need to be aware of what message that grotesque art presents.  Furthermore, I applaud movies that are completely creepy at no culture’s expense.  In terms of major franchises, Insidious and The Woman in Black come to mind.  Part of my point is that exoticizing “the other” in horror films is socially problematic.  Another part of my point is that it’s become hackneyed.  In terms of canonical films that have already done this, well, we watch them anyway.  But maybe we entreat contemporary writers and directors to be more creative.  Instead of attributing every ounce of evil or bump in the night to a culture that seems remote from ours, maybe they should push themselves to find a better ghost, a better demon, a better evildoer.

Like Loading...
The Natives Will Eat You: Cannabalism, Ancient Indian Burial Grounds, and the Insidious “Other” in Horror Films

2 thoughts on “The Natives Will Eat You: Cannabalism, Ancient Indian Burial Grounds, and the Insidious “Other” in Horror Films”

Academic and Writer for Hire