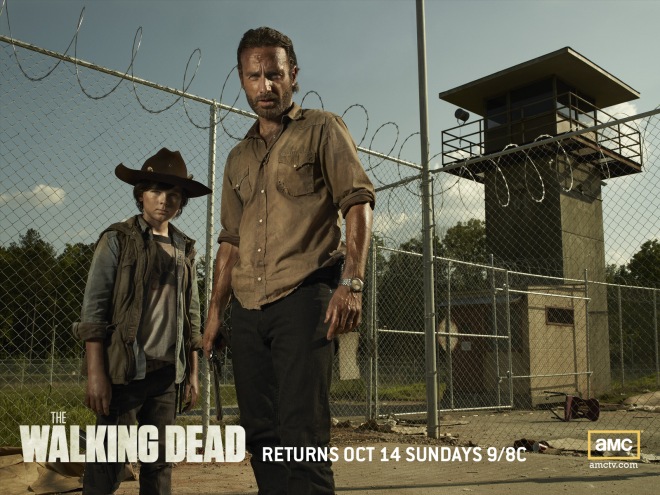 I love watching The Walking Dead before bed.  I have coined the term “Dead ‘til bed” for nights I set aside for a Walking Dead marathon.  Nothing says nighty-night like slaughter, zombie guts and involuntary bloodletting.  Indeed, I just finished season three, and I started watching the show a couple weeks ago, so I’m catching up quickly.   But if mindless zombie hacking was all the show was about, I would have already stopped my viewing, and the show wouldn’t be in its sixth season.  Much of The Walking Dead’s intrigue lies within its characters.  The show presents us with complex, dynamic characters who evolve and adapt to a disorienting apocalypse, many of them with admirable gusto.  We warm toward them and cheer for them.  Season three, in particular, is rife with captivating character development.

Complex characterization starts when fearless leader Rick descends into a seemingly infinite abyss and becomes, well, not so fearless.  Rick and his wife, Lori, are in the midst of an argument when Lori dies in childbirth, leaving a half-mad Rick to roam around the prison, seeing visions of Lori everywhere he looks.  Rick has been the group’s go-to rock, but after Lori’s death, he unravels from the stress of losing his wife and the pressure of being the group’s leader and veritable dictator.  Rick’s visions of Lori initially seem like representations of his guilt.  He blames himself for deaths in the group, including the death of Lori, with whom he was arguing before her death.  Indeed, when he first starts seeing Lori, he is terrified and wants her to leave.  But soon, Rick starts seeing Lori at pivotal, decision-making moments in the show, and she becomes a spiritual guide for him.

In seasons two and three, Rick seems to be hardened.  Rick has always taken a humanist approach to the apocalypse, doing his best to ensure the well-being of each individual, even when such efforts danger himself and the group.  He has not advocated, until this point, the sacrifice of one for the benefit of the whole.  Indeed, he begins the season as a paradigm of near-perfect nobility.  His cold, “do what’s best for all,” utilitarian mentality begins to emerge in season two, when he takes Shane’s advice and (almost) decides to kill the rival gang member – a trembling child who begs for his life.  Ultimately he relents, but Shane commits the deed behind his back.

In Season three, the Governor offers Rick a false proposition: If Rick hands over Michonne (who beheaded the Governor’s zombie daughter), then the Governor will spare the rest of Rick’s people.  Of course, the Governor is lying; once he has Michonne, he still plans to wage war against the prison.  But Rick naively believes him and decides to sacrifice Michonne to the governor.  He goes so far as to tell Merle—who’s used to doing people’s dirty work and is willing to round up Michonne—about his plan.

If the question is—“How much would the conditions in The Walking Dead inherently corrupt someone?”—the answer seems to be quite a bit by the middle of season three.  But Rick’s more humanist side emerges again, when he decides that giving up Michonne is the wrong answer, and, most surprisingly, forsakes the “Ricktatorship” in favor of a more democratic approach to dealing with apocalyptic woes.  In other words, Rick has an epiphany; he is not the God-given leader of the group, and his decisions aren’t always the best.  Because he almost made the terrible decision to hand Michonne to the Governor without group consent, Rick has the revelation that nothing good comes from a dictatorship, even with a good dictator.  He realizes he’s unable to carry the group on his own and decides that everyone should have a say in how they live.  And he understands that he lives with other human beings, who are working together to form a mini-society.  A system of ethics which allows for human choice is necessary, even in dystopia.

If Rick’s perspective grows in Season Three, so does Andrea’s.  In previous seasons, Andrea has been strongly focused on herself.  She’s been aggravatingly fixated on whether or not she’s allowed to shoot a fire arm, and she undercuts Lori’s intervention with Beth, seemingly with the intent to let Beth kill herself.  But when she stays in Woodbury despite Michonne’s objections, her motives are human and understandable.  I wanted to cringe at her terrible taste in men as she warmed up to the completely underhanded, basically malicious governor, but I was incredibly moved when she tried to escape the town a second time and run to the prison to warn her friends about imminent attack.

In Season Three, Andrea’s focus moves from what’s best for Andrea, to what’s best for everyone, even at the expense of her own well-being.  In Season One, she considers suicide out of complete despair.  After Amy died, life ceased to have a purpose.  By season three, she has found a purpose: risking herself to save her old group at the prison.  She cares about being alive more now, but is willing to risk that life for those she used to travel with.  She is self-sacrificial – a quintessentially dynamic character.

Before Andrea finds Woodbury, she meets Michonne in the woods.  At the beginning of season three, we get the sense that Andrea is only alive because of Michonne.  We know immediately that Michonne is a complete badass, as she wields her enoromous Katana to protect herself and Andrea from zombies.  But she doesn’t talk a lot, and before we get truly acquainted with the Governor, she seems unfairly suspicious of him.  Although we know she is innately “good,” she isn’t particularly likable at first, in part because of her reluctance to speak, especially when the situation necessitates it.

We soon find out, though, that Michonne’s suspicions of the Govenror are vindicated.  The Governor is the inception of evil – easily the most malicious character in the show so far – who harms anyone who crosses him, sometimes to benefit himself and other times for sheer enjoyment.  When the Governor starts an unnecessary war, Merle captures Michonne, who he plans to hand over to the Governor to prevent that war.  Michonne’s words to Merle are easily one of the most dynamic parts of Season three.  Michonne, remarkably, convinces Merle that he’s not a bad person.  Typical of a classic introvert, she doesn’t open her mouth much, but when she does, brilliance springs forth from her speech.  She tells Merle that truly evil men feel no pain, no hesitation, when they harm others, implying that Merle does feel uncomfortable doing such acts and is good at heart.  She reminds Merle that before the apocalypse broke, he never killed anyone.  In convincing him that he’s a good man who does other people’s dirty work because he thinks he’s bad, Michonne’s most important role in Season three emerges:  Michonne serves as the catalyst of Merle’s redemption.

Merle is unquestionably the most dynamic character in season three, though he comes to an unfortunate end.  After Merle captures Michonne and Michonne tries to convince him that he’s good, the viewer thinks Merle is going to follow through with his intentions to deliver Michonne to the Governor, but he doesn’t.  He drops Michonne off by the side of the road and lures a group of zombies to the site where he was supposed to meet the Governor.  Then, he hides in a barn and shoots at the Governor’s men as the zombies attack.  Merle, who was handcuffed to a post in the beginning of season one for being racist and violent, who beat up Glen, who did the Governor’s dirty bidding, that same Merle lets Michonne go and single handedly tries to massacre the Governor and his men to prevent war on the prison.  Unfortunately, the Governor finds Merle and kills him, but not before losing a lot of the men that would have helped him wage his attack.  In this way, Merle becomes a sacrificial character, a hallmark of redemption.  Merle goes from being dangerous, to being near Christ-like in his self-sacrifice.

In season three, we also see a kindness emerge from Hershel, and Beth becomes a stronger, more integral part of the group.  However, the last really significant character transition comes in the form of Carl.  Let’s be honest.  Carl is downright whiney and annoying in Season two.   But in season three, we see a matured Carl who has the interest of the group in mind and a genuine desire to help others.  Unfortunately, much of Carl’s childhood has been in this apocalyptic world, and to call him cynical would be an understatement.  When the members of the prison win the war and drive the Governor’s men out, a frightened kid runs through the forest and tries to escape the mayhem.  Though he was part of the Governor’s team, it’s obvious that he is not a threat.  Hershel and Carl stop him as he runs through the woods.  Hershel pauses, with no intent to hurt him, but Carl kills him on the spot.  Carl’s reasoning?  We let others live, and they came back to hurt us.  If we let him live, he could come back to hurt us.  Carl’s reasoning is cold, but not necessarily illogical, and it makes one wonder both what kind of person this type of world grooms, and what kind of person this world requires.

The Dalai Lama once said that we can make the difficulties in our life harden us, so we become resentful and afraid, or we can let them soften us and make us kinder.  Apocalyptic dystopia seems to work similarly.  From the ashes of this fallen world emerges both practical, hardened, utilitarianism and genuine thoughtfulness, redemption and self-sacrifice.  Characters and plot are synonymous in literature.  A character takes an action, and the action serves to define a character.  Characters drive the plot, and the plot shapes the character.  Plot and characterization merge masterfully in The Walking Dead – a show that creates intense drama and action, but also creates dynamic, relatable characters that keep the viewer coming back.  I fear for the well-being of some characters, and I’m completely inspired by the actions of others.  After all this fantastic characterization in Season three, I’m ready to start season four!

One thought on “Walking through The Walking Dead (Season Three): The Characters”