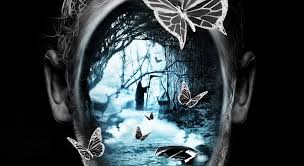 We all hope we’re going up to that spirit in the sky when we die.  If you’re a cynical doubter like me, you just hope there is, indeed, a spirit in the sky – a gate with a St. Peter-esque figure, surrounded by some winged cherubs and signaling entrance into eternal, infinite bliss.  But, hell, if that’s too much to ask for, I’ll take reincarnation, as long as I don’t have to come back as something lame like a flea or an earthworm.  I mean, haven’t we all thought, “Damn, I hope there’s something?”  I think even those with the strongest faith – and I don’t count myself among them – sometimes doubt the presence of an afterlife.  In any case, it’s something we all think of, just not daily or compulsively.

I love to write, but I don’t see myself as much of a fiction writer.  I think the hallmark of a true fiction writer – and this is a quality I do not possess – is the ability to see a story in everything. When I read the short story introductions in Stephen King’s Bazaar of Bad Dreams, I see an active mind that sees fiction potential in every thought or event.  So it’s not surprising that King wrote a story called “Afterlife,” which is about no less than the afterlife.  He mused on the subject himself for awhile, and thus came the story.  The idea makes perfect sense – so much so that I wonder “why didn’t I think of that” after I read the introduction to his story.

King’s 50-some Goldman Sachs banker protagonist, William Andrews, finds himself in a hallway after he dies.  The hallway is unceremonious, and he has no choice but to enter the door of one inarguably bitter Isaac Harris.  Harris owned a shop in 1911.  He locked the doors from the outside because the girls who worked in his shop would steal things.  One day, there was a fire, and nobody could get out.  Harris died in that fire, along with over 100 of the women who worked for him.  Harris cannot seem to own up to his contribution in the mess, although the reader soon learns that Andrews has a few transgressions from his life on his conscience, too.  Harris’s penance seems to be playing the mundane role of clerk to the dead, a penance about which he’s infinitely angry.  This storyline – and the thought of punishments in the afterlife – causes the reader to ponder questions of justice: what is a fair recompense for Harris’s sins?  Do we atone for our wrongdoings in life through an afterlife?

We soon find out that Bill has been asking the same questions to Harris over and over again for eternity, which invariably annoys Harris.  Bill has two choices: he can re-live the life he’s already lived, or he can simply wink out – cease to exist as both a living being and a human consciousness.  Bill becomes optimistic.  After all, if he’s allowed to start over again, he can avoid all his previous mistakes, like slamming his brother’s finger in a door and date raping a girl at a frat party.  A frustrated Harris assures Bill that this isn’t so: inevitably, he’ll make the same mistakes he always makes, wind up back in Harris’s office, and decide to start his life all over again.

This vision of the afterlife initially seems depressingly pointless.  If we cannot live a better life the second time around, what’s the point of re-living a life at all?  At the same time, who wants to vanquish into eternal oblivion?  When I was younger, I was always startled by the concept of eternity, the notion that time could go on and on forever with no cessation.  Stephen King plays on our fear of this concept in “Afterlife” by suggesting our eternity will be hellishly repetitious.  But most of the time, we won’t realize we’re repeating the same life, so is it really hellish?

After all, Bill’s eternity is only meaningless because his life is depicted, in the story, as relatively meaningless.  King intentionally highlights his sins, not his triumphs – if there are any – making his life seem like a relatively monotonous stream of inconsequential actions and minor to significant wrongdoings.  We could imagine Mother Theresa being asked to live her life over and over, and her eternity would seem far less meaningless.  Which means, in a sense, this story is meant to get you thinking about your life.  Would you want to repeat your life again and again?  What are you doing now that is important?

King’s story isn’t scary, per se.  In a strange way, it’s almost philosophical.  In Nietzche’s theory of Uberman and the Eternal Return, he speculates that we live the same moments over and over again.  King is saying quite the same thing.  But maybe his view is refreshing and modern.  He doesn’t scare us by depicting the fires of hell.  I’m sure Stephen King, of all people, could write a great story about hell, but would it be cliché to do so?  King may imply that Bill has created his own hell through a subpar life that he’s forced to live again and again.  Or he could be implying that with all the pomp and circumstance surrounding our notion of the afterlife, it may not be as grand as we think.  In any case, King’s story probably won’t scare you, but it will make you think about death – and, more importantly, about your own life.