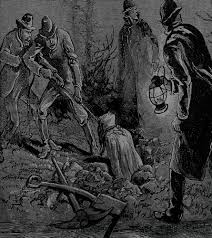 Robert Louis Stevenson does horror supremely with “the Body-Snatchers.”  After all, what better sustenance for horror than a story about the illicit collection of corpses for money?  In life, we all face situations where we have to choose between right and wrong.  Sometimes, the right action is obscured, but usually the choice is clear.  Only, the right action is difficult to take, for various reason.  Such a conundrum becomes the impetus for further action in “The Body-Snatchers.” “The Body-Snatchers” is a gruesome story about the domino effect that follows a blatantly wrong choice, and the chooser’s concomitant fall.

The story starts where a lot of old horror stories begin: with a group of people, sitting around chatting, long after the story-provoking occasion has occurred.  Henry James’s “The Turn of the Screw” starts out with a group of people telling ghost stories of long ago around the fire, and Algernon Blackwood’s “The Wendigo”  begins similarly.  Assuredly, myriad other stories begin this way, too.  Usually, there is one witness to the event.  In this case, the witness is Fettes, a reckless drinking man who crosses paths with a doctor and accomplice of old named Wolfe MacFarlane.  Fettes harshly scorns the unready MacFarlane, who doesn’t know how to respond to Fettes’s contumelies. As readers, we don’t know why Fettes responds so violently, but we suspect that his personality is conducive to such reactions.  All the same, we suspect that Wolfe MacFarlane did something genuinely terrible.  Eventually, the narrator elicits the story from Fettes, which he recounts to us.

Fettes, as a young man, was a promising anatomy student who worked for one esteemed “Dr. K.”  (A line following the K suggests that his full name cannot be revealed, another tendency typical of older horror stories).  Dr. K collected dead bodies that his anatomy students would use for experimentation, in exchange for a fee.  Fettes aided Dr. K in this pursuit, along with Wolfe MacFarlane, who Fettes worked directly under.  Fettes began to suspect that people were murdering others to create corpses and make money, but he made the near-fatal decision not to do anything about it.

One day, he sees the body of a girl who he was laughing and talking with the day before, and Wolfe confirms his suspicions: the girl was murdered so the murderers could collect money for her corpse.  This is the point in the story where the fall begins.  Fettes conceals the information and continues collecting bodies, much because of Wolfe’s goading.  When Fettes drinks with Wolfe and one of Wolfe’s rivals at a tavern one night, and Wolfe comes to Fettes to collect his sum for the body of the rival the next day, Fettes knows that he’s in too deep.  Woolf even notes to Fettes that it’s too late to do anything.  He was already a complicit accomplice in the first crime, so he can’t well report the second when he didn’t report the first.

This realization provokes Fettes’s further fall.  If he’s going to involve himself in a life of crime, he might as well delve into it headfirst.  He and Wolfe continue their business, often robbing cemeteries for corpses when Dr. K needs more bodies for his students to experiment on.  He no longer lets his conscience so much as try to intercept his actions, but does exactly what Dr. K demands.  However, one night in the cemetery, Wolfe and Fettes’s plot to rob graves goes awry, and something sinister and inexplicable ensues.  This is the story’s surprise ending, and as a reader, I didn’t quite know what to make of it.

What we don’t get, as readers, is an account of how Fettes got out of the business, or what Wolfe MacFarlane did directly after he was involved in the art of “body-snatching.”  We know that by the end of the story, Fettes is a coarse, unrefined man with a temper, and Wolfe MacFarlane is a classy, wealthy, well-spoken doctor.  In “Sympathy for the Devil,” the Rolling Stones sing, “Please allow me to introduce myself, I’m a man of wealth and taste.”  The descriptor aptly conveys MacFarlane’s status, likening him to a sort of demonic entity.  His insidious ability to commit murder for money is hidden by his professional status and his external refinement.

As for Fettes, we could adopt one of two arguments: One, that when Fettes didn’t report the murder of the girl, he made a conscious choice to enter the business of Wolfe MacFarlane and Dr. K, or, two, that Fettes was initially shocked, and came to his senses upon the second proven case of murder, at which point it was too late to turn anyone in.  It seems that, like so many falls, the fall was a combination of Fettes’s decision and a malevolent external force pulling him down, without him fully consenting.

“The Body-Snatchers” is one of the best horror short stories I’ve read lately, if for no other reason than the premise is completely original and completely grotesque.  One can almost picture the cold, calculating, refined MacFarlane and the garbled, rough-around-the-edges Fettes, aged after their years in an illegal body trade.  Indeed, this 16-page story is a must-read.