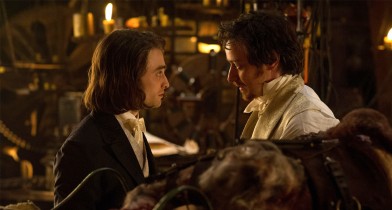 The story goes that Mary Shelley was lounging around with a group of people – perhaps one dark and stormy night – and someone presented a challenge: who could develop the best horror story on the spot?  And so the evolution of Mary Shelley’s Frankenstein began, the story of a perhaps-mad scientist who endeavors to bring a corpse to life and achieve all the fame and glory that would conceivably come with such a feat.  I don’t know if Shelley won the contest, but her story has become both a popular Romantic-Era novel and the stuff of legend and campfire tales.  Of course, in an era obsessed with vampires and zombies, it’s easy to overlook Frankenstein’s monster, or Frankenstein himself.  In the most recent reincarnation of the story, the movie Victor Frankenstein, director Paul McGuigan tells Shelley’s story from a different angle: The story focuses heavily on Victor Frankenstein, true to Shelley’s text, but it eschews a thorough examination of the monster.  The result?  We get less a horror movie, and more a character study.

That the movie will adopt this angle is no secret or subtle maneuver.  Danielle Radcliff’s character, Igor, states that the beginning of the story that Frankenstein’s monster gets all the fame, and he wants to tell the story of Victor Frankenstein, the man.  The strength of that story is a matter of opinion: Roger Ebert gave the film a 1.5 out of four, and it garnered a 25% rating on Rotten Tomatoes.  Despite its negative reception, though, the film does have merit.  The story raises plenty of thematic questions, namely about hubris and obsession.  McAvoy plays a quirky but endearing Victor Frankenstein, and Daniel Radcliff does a thorough job as Igor, though the film didn’t completely utilize his talent, and he didn’t cast even one Patronus Charm.

I’ll preface this analysis by saying that I haven’t read Shelley’s Frankenstein in a very long time, and for a literature professor I’m remarkably bad at remembering what I read.  But I know Shelley’s Victor Frankenstein is arrogant, and while McAvoy also plays an arrogant Frankenstein, we immediately connect with him and root for him.  He rescues Igor from brutal, abusive circus captivity and fixes Igor’s hunched back.  He treats Igor as an ally and a friend.  And he struggles to find people who accept and appreciate his work.  But he is obsessed with his mission, first, to bring an inanimate mass of animal flesh and fur to life, and then to construct a human being and bring him to life.  Unlike in the book, this movie’s Victor Frankenstein has Igor to balance out his avarice as a voice of reason, but Igor’s efforts go largely unacknowledged until the situation has gone irreversibly awry.

It’s no secret, in the novel and in the movie, that Victor Frankenstein seeks fame for his discovery.  Like the ill-fated Icarus who exceeds his boundaries, flies to close to the sun, melts his wings and falls to his death, the similarly ill-fated Victor Frankenstein transgresses the boundaries between life and death and seeks to do that which only God can do – build a human being and bring him to life.  Victor Frankenstein’s metaphorical sun is his desire for everlasting glory, but such glory isn’t his only motivation.  We learn in the movie that Victor feels responsible for the death of his brother, Henry, and seeks to re-create the life that he perceives he took when he forced Henry into the cold with him.

But this seemingly praiseworthy motive is overshadowed by two things: first, Frankenstein’s equally strong desire for fame and renown, and second, the grotesque steps he takes to achieve his ends.  In the movie, he constructs a veritable mega-man by using two sets of human lungs and two hearts.  This piecing-together of a human being from corpses’ scraps flies in the face of any goodwill and makes it seem futile and laughable.  He knowingly defies natures laws and – in the movie – mocks God, for his own glory on earth, so is his desire to replace the life he took really altruistic?  Can we commend the motive when the result is so catastrophic?

Indeed, one shortcoming of the movie is that Victor’s motives seem difficult to reconcile.  We see Victor, wild-eyed and obsessed to achieve a depraved goal, while sentimental and rueful about his brother’s death.  It seems perfectly reasonable that part of Victor’s intentions are good – again, he’s a more redeeming character than he is in the book – but these two motives sit next to each other incongruously in the movie.  Through script-writing and directing, the movie doesn’t do enough to blend the two contrasting motives, so they exist together unrealistically.

Frankenstein’s monster is only revealed at the end of the film.  By this time, as a viewer, I was giddy with excitement to see the monster.  After all, the first animal-monster that Victor created was pleasingly hideous.  But his human monster is quite disappointing.  The hulking, bald green mass looks more like an action movie villain than a macabre being.  And while the movie was supposed to focus on the life of Victor Frankenstein, our time with Frankenstein’s monster is remarkably short.  The only reason this didn’t disappoint me was because I was so under-whelmed by the monster.