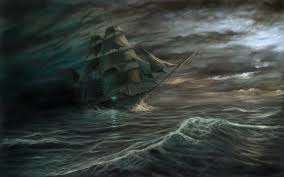 “The Voice in the Night,” by William Hope Hodgson, published in 1907, starts like a stereotypical horror story: “It was a dark, starless night.” But Hodgson manages to provide suspense – and at least a few small surprises – throughout the telling of his story. As is typical of old horror stories, a narrator regales us with macabre events that have passed. George, the narrator, is sailing through the Northern Pacific with his friends, when they hear a faint voice coming from a small boat.

The passenger of the small boat refuses to come into the light and indeed entreats the narrator and his friend to turn off the light before he draws near. They cannot see the passenger. My reaction was to assume that something insidious lurked in that vast expanse of ocean, hidden behind the guise of a quiet, meek human voice. I assumed the stranger was dangerous. After all, I found this story in my trusty Barnes & Noble Horror Anthology.

The odd nature of the situation – a small boat meeting a large vessel in the middle of the Pacific, an unknown voice intent on not being seen – establishes suspense already, but the suspense intensifies as the voice talks. Hodgson uses a lot of dashes. The voice—will—pause—as if—questioning—its own words. For example, when talking about the woman he left on an island, the voice of the man on the boat says “The—lady is grateful now on earth. She will be more grateful soon in—in heaven.” These pauses insinuate something momentous – in fact, portentous – has yet to be revealed.

The men on the ship face a catch-22 situation. To deny the stranger the food he requests would be heartless. To help the stranger – to tell him to approach the ship in the dark – could be dangerous. But the men on the ship are surprisingly unafraid. Their lack of fear is especially surprising from the perspective of a contemporary reader, since we live in an era in which we’re so irrationally afraid of other people. The men send generous heaps of rations to the little boat.

We find that the man on the boat – and the woman he left behind, waiting for him, on an island – were passengers on the sunken ship The Albatross. I took the “albatross” allusion as an intentional nod to Coleridge’s Rime of the Ancient Mariner, in which the main character is forced to wear a dead albatross around his neck as penalty for shooting it. In that case, the ship’s name would foretell an insidious burden the abandoned man and woman were to suffer, and may imply that they did something taboo – if not sinister – to deserve their plight. Albatrosses were well-known nautical birds, so it’s possible the ship’s name does not possess such significance, but I suspect it was an intentional maneuver by Hodgson.

When the men on the ship first hear the voice of the man on the boat, they think he’s insane. But after listening to him, they realize he’s only afraid. The narrator recalls: “And with the lightning-like conviction, there came the knowledge that the Invisible was not mad; but sanely facing some intolerable horror.” His horror is comprehensible after hearing his story. And his story – which I found more the stuff of science fiction than horror, by contemporary standards – probably serves to remind the men – and the reader – that safety is a malleable condition.

When The Albatross crashed, the man on the boat and his wife crafted a raft, found provisions, and sailed to sea. Ultimately, they stumbled upon an island where there was an abandoned ship. But what that ship contained, and what the island did to the man and the woman, is not for me to tell in this review. Suffice it to say, their ultimate demise is ensured.

I’ve analyzed other stories on the blog through the lens of Yi Fu Tuan’s Space and Place theory. To Tuan, “place” is an area that is intimate and familiar. “Space” is a vast, expansive realm of the unknown. Both geographical extremes have positive and negative characteristics. But this particular story taps into peoples’ fear of uncharted space. George and his friends are sailing on a large vessel that is highly familiar to them, thus they sit comfortably within “place.” But mere yards away from them is a man facing incipient terror. If their ship were to crash like The Albatross crashed, would they be subject to the same fate? The anonymous man’s story illustrates just how tenuous “place” and its concomitant security are, especially in an oceanic environment.

The ocean, with all its formidably unknown components, constitutes “space.” While space can be freeing and liberating, Hodgson depicts the “space” (the ocean) surrounding “place” (the ship) as holding myriad dark and catastrophic possibilities. It takes only one faulty component of the ship, one bad storm, to put George and his friends in the position to experience the same horror that the lone man on the boat is experiencing (along with his wife, on the island). The very situation may cause the reader to question his or her own safety. After all, the men on the ship must have regarded themselves as safe, since they were unafraid to help the unknown man on the boat. But after hearing his plight, how could they not see that their unpredictable environment was perfectly capable of putting them in a situation of similar doom?

“The Voice in the Night,” reminds us how fragile we really are, and how much danger might rest in the unknown-nowhere situated outside our comfortable confines. The story hints at the unsettling notion that we’re never really safe, even when we feel bravest and most secure. I would have liked a stronger ending-twist than the one Hodgson provides, but a reading of this story will certainly support the assertion that his imagination was inclined toward the realm of the dark and twisted. Find out what happened to the loan man on the boat, and the woman he left on an island. Read the story!

How do you define the word safety? Do you think fear of the unknown is an inherent part of the human condition? Comment below!

Understanding ourselves and the world we live in.