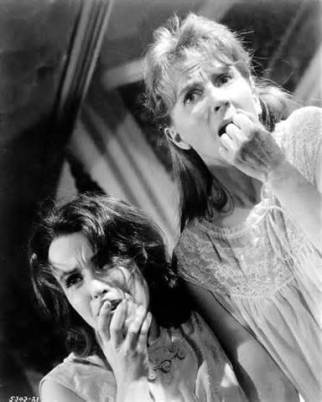 In a previous post about Richard Matheson’s Hell House, I posted about a house that was evil because it contained evil.  In Hell House corruption festers for years, leaving the house insidiously haunted.  The 1963 film, The Haunting, is based off Shirley Jackson’s book The Haunting of Hill House and also details the occurrences in a haunted house.  But Hill House in The Haunting is different.  True, the movie implies that its owner, Hugh Crane, was sadistic and twisted.  And his daughter Abigail died in the house, an old woman, because of a paid companion’s negligence.  But the haunted house in The Haunting started killing on its own before these events occurred.

When Hugh Crane built his house in the 1870’s, his first, and then his second wife, died immediately, in different accidents in the house.  The accidents are attributed to the house’s malice, apart from any phenomena of haunting.  One character, Eleanor, repeatedly calls the house “vile” and Dr. John Markaway calls it “sick, diseased, and deranged.”  In short, Hill House was “born bad.”  From the standpoint of a horror lover who has a fascination with evil, I’m not sure what to do with the notion of an inherently evil house, a house that’s evil with no stated reason for being evil.  The Overlook Hotel in King’s The Shining was evil, but we know it was built on an Ancient Indian Burial ground, which fuels its motives.  And the entities that truly commit evil acts in the hotel are the ghosts.

The motif of the naturally sinister edifice is rarer in horror.  On the one hand, it seems like a copout.  The writer has no explanation for the house’s viciousness, so the house is deemed evil from the get-go.  On the other hand, the concept is fascinating.  What is a house but a building manufactured from man-made material, the byproduct of bricks and sweat?  How does a house possess a spirit without prior haunting?  How can a pile of bricks be malicious?

Dr. John Markway heads a team that will investigate Hill House, a team complete with psychic Theo, the owner’s haughty young nephew, Luke, and the quiet and eccentric Eleanor, who was touched by paranormal activity as a young girl.  The ambition that fuels the investigation is similar to the rationale behind Hell House’s investigation in Matheson’s so-named book; someone in the movie – in this case, Markway – seeks evidence of life beyond death.  I always find this proposition strange in haunted house novels.  Generally, when human beings seek a knowledge of life after death, they want the comfort that accompanies that knowledge.  We all want to believe that we are going to heaven, or perhaps that we’ll undergo a nice reincarnation.  I, personally, would like to be reincarnated as Mindy Kaling.  She’s pretty cool.  But what comfort is there in knowledge that ghosts exist?  Who wants to know that their spirit may be trapped in a house long after their passing, that they may carry chains and moan like Jacob Marley?  This desire seems a strange ground upon which to launch an investigation – a need for reassurance of life after death – and yet it’s now propelled two haunted house stories I’ve recently enjoyed.

Eleanor is the pivotal character in the movie.  She is vaguely sympathetic, if not all together likeable.  She depicts the plight of the marginalized woman in the early 60’s.  For eleven years, she took care of her sick mother.  After her mother died – two months prior to the movie’s setting – she lived on her sister’s couch.  Her sister and her sister’s husband are notably patronizing and controlling.  I was sorry for Eleanor, though she seemed unstable and erratic.  For my Master’s Thesis, as I’ve mentioned before, I investigated the phenomena of the mentally ill woman in terms of theories about environment – space and place specifically.  It seems apropos to do this with Eleanor.

Eleanor’s neurosis arguably places her in a mentally unstable category.  Her inner monologue is depicted throughout the movie, the inner monologue of someone who is isolated, slightly paranoid, and yearns to be loved.  Significantly, since she lives on her unloving sister’s couch and her mom has died, Eleanor feels she has no home.  Perhaps unsettlingly, she revels being called to investigate Hill House because she deems it a place she’ll be wanted, expected.  Not surprisingly, then, the house preys on her and tries to capture her for itself.

If Space is openness and freedom, and place is warmth and familiarity – according to geographer Yi-Fu Tuan – than Hill House is a non-place.  It is, quite literally, cold, from supernatural presences, and the unexpected screams and maneuvers, the constant bumps in the night, make it the antithesis of familiar.  At the same time, its frights are contained in restrictive walls, and its dangers make it anything but free.  Hill House is not space or place.  Hill house is a non-place.  In my research, mentally ill women in literature are often forced into non-places because these unhospitable zones seem apt for them to negligent caretakers.  Interestingly, this non-place seeks its ill victim and reaches out for Eleanor.  And Eleanor reaches back.  The mentally ill woman, in this movie, wants to reside in the non-place.

The Haunting is a classic black and white, with impressively opulent, creepy scenery and jarring camera angles.  If you’re expecting to see phantoms, don’t get your hopes up.  Menacing presences abound, but you may not see a lot of ghosts, per-se.  The film is known as a psychological thriller, so director Robert Wise messes with your mind as he takes you through Hill House.  Eleanor’s internal dialogue and perpetual feelings of uncertainty amplify the tension.  I often don’t credit old horror with being particularly scary by contemporary standards, but this 1963 film is delightfully unnerving.

4 thoughts on “From Hell House to Hill House: Some Perspective on the Original “The Haunting” (1963)”

“Compassionate toward oneself, we reconcile all inner, and the universe - from within.”

writes a short story every week