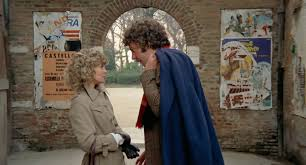 The 1973 classic Don’t Look Now initially does not appear to fall under the banner of horror.  Shortly after John and Laura Baxter (Donald Sutherland and Julie Christie) lose their daughter in a drowning accident – a scene which is remarkably unsettling – they end up in Venice, where John, as an architect, helps restore ancient sculptures and cathedrals.  Laura is understandably depressed and detached after the incident, until she bumps into two women in Venice, one who – in a typically ironic way – is blind but has a psychic’s second sight, like a seer in an Ancient Greek tragedy.  She tells Laura that her daughter is with them and happy.  Shortly afterward, Laura faints, but when she awakes, she’s a remarkably new woman, optimistic and seemingly unscathed by past events.  John, the stereotypically skeptical male, insists that Laura is unwell, despite her insistence that the blind woman’s abilities are legitimate. Laura visits the women again, and the psychic tries, although unsuccessfully, to contact her daughter.

I was greatly anticipating this film, and found myself constantly on edge, waiting for something horrific to happen.  Though the film didn’t deliver consistent horror, the picture was intriguing.  The ending was startling and definitely justified the time investment.  While much of the film doesn’t feel like horror, the storyline and camera-work is compelling enough to keep the viewer interested.  Unlike many other horror movies, the viewer gets to intimately know John and Laura and gets insight into the strength of their relationship.  (Perhaps one extended sex scene gave me a little too much insight).  Their dynamic – Laura, the joyously open-minded believer, and John, the “rational” male skeptic – was believable, if not a bit too typically gendered.  Their love was certainly evident.

Camera work is unsettling in the film.  The angling and movement of the camera make the viewer consistently anticipate alarm – which comes sometime, but not as often as the camera angles would lead one to believe.  Often, the camera will zoom in on something seemingly consequential, that ends up being a small piece of architecture or similar minutiae.  The multiple shots of Venice are interesting, too, and it’s dishearteningly, perhaps sickeningly ironic that John and Laura end up working in a town built exclusively around water so soon after their daughter’s death.

The most odious part of the film is when the psychic woman tells Laura that John will be in great danger if he stays in Venice.  Again, this is a warning that Laura heeds and John does not.  She ends up boarding a plan to London after her son has an accident at boarding school, and John is left to brood in Venice alone.  Around this time, the story’s scariness amplifies.  The pace of events quickens and the viewer gets the uncomfortable feeling that something is terribly wrong.  The ending, I thought, was intense and alarming, and sealed this movie’s categorization as a horror movie, despite my thought – during some parts of the film – that the true horror may never arrive.

Characters are misled repeatedly in this film and come to many wrong conclusions.  The misleading nature of the external environment raises the question: is life ever really as it seems to be to us?  Forces of good and evil combine in this film to weave a fate that, had hubris not won out, may have been avoided.  How often do we think we’re taking a right action, headed down the correct path, when really we’re being deceived by a force we can’t see?

I like this film.  Even if depictions of gender are, in some ways, stereotypical, they’re not distressingly stereotypical.  Laura is more disturbed by her daughter’s death, and is encouraged by John to “take her pills” like the typical literary or cinematic “madwoman,” but she rises above this role and proves to be a strong, competent, intelligent female character who is also notably caring and compassionate.  And, bonus, we get to see The Hunger Game’s president Snow in his younger years as John Baxter.  Because of its innovativeness, this film definitely entreats a place in the horror canon and is a must-watch for the self-professed horror fan!