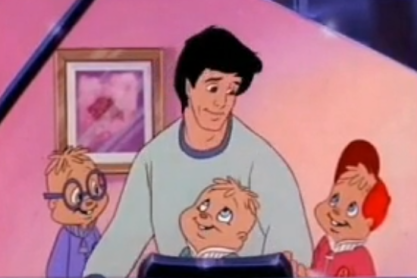 This may alarm you (in fact, you might want to sit down to hear it), but I wasn’t always an intrepid pioneer who sojourned through the world of horror with ease, grace, and relative peace of mind.  I know: you thought I was born unflinchingly brave and are now trying to deal with the shock of finding out that even I, your humble Just Dread-Full writer, used to scare easily.  But when I say “easily,” you might not understand just how easily I scared.  To paint you a vivid picture of how far I’ve come in my (almost) 32 years of existence, how much bolder and more brazen I am, I’ve decided to tell you about one of my first scares (I’ll probably tell you about the other in a second part of this segment). Long before I sought the adrenaline of a tasty jump-scare, I used to quiver, quake, and cry at sudden upsets to my calm surroundings.  I was, to be truthful, kind of a baby.  You may gather that this is true when I tell you my earliest scary memory.

The first instance takes place on an idle eve (or series of eves) in early December, when the more jovial participants in Western culture and Christianity begin to celebrate the Christmas Holiday.  I was probably about three when this happened (though I’m not sure) so let’s say it was about 1987.  Picture a quiet street with an ornate Catholic church on the corner, an olive green flat with a small garden, and a warm, lighted kitchen with a group of adults sitting around a table and the melodious din of Christmas music reverberating from a speaker built into a wall.

Suddenly, two adults (they happen to be my parents) get mischievous grins on their faces (you best believe they knew what they were doing), and suddenly you can hear the frenzied, soprano squeals of Alvin and the Chipmunks in the background singing about their avaricious desires for that much-venerated toy: the hula hoop.  (Yeah, you’ve heard the song.  Surely, you’ve heard the song).  Now, to your average adult – or, to most children – this song is at worst a mere annoyance, and at best, a festive holiday tradition.  But to young, emotionally vulnerable Kalie (that’s me, if you haven’t figured it out, I’m Kalie), this song portends imminent doom.  It’s all fun and games when the blindly happy chipmunks are serenading us about their anticipation for the holidays, but anyone who’s heard this song a couple of times knows that it takes a dark turn.  Suddenly, a booming voice intercepts the felicitous merriment and screams, “Alvinnn, Alvinnn, Alvinnn!”

It’s horrible – right?  We’re all smiling, bobbing our heads to the soothing cadence of happy chipmunks when this asshole, Dave, has to get all worked up about something and scream at Alvin.  And I mean, he screams.  On the one hand, the whole scenario is a little unsettling.  On the other hand, kids are funny creatures, really.  After all, anyone who knows the background to Alvin and the Chipmunks (though I probably didn’t, then) knows that Dave isn’t an odious character.  And I guess I must have had a privileged childhood; I was so afraid of Dave’s loud voice because I wasn’t used to such raised voices and yelling.  In any case, something about the way Dave yelled at those chipmunks truly terrified me.

When my parents would turn on the dreaded chipmunk song, I would run out of the kitchen in my grandma’s house, where, as I’ve mentioned, a hearty speaker wired to the record player in the back room was built into the wall.  If I ran into the first sitting room I found some, but little, sanctuary, for in the adjacent room sat the blasted record player, the insidious device responsible for crooning those horrendous tunes.  My grandma’s old flat on East 10th Street was not a large edifice, and if my parents or relatives had a mind to play the chipmunk song during the days approaching Christmas, I had little recourse.  I wonder, now, at the fact that I didn’t simply run outside and bury my head in the snow, but then, I was not a child prone to testing boundaries and limits.  Not then.

I can laugh at all my fear retrospectively, but the incident provides some important perspective for me now.  On the one hand, how simple it seems now to be a child.  How I may sometimes wish that the most terrifying element of my existence was a cartoon character’s raised voice in a playful Christmas Carol.  On the other hand, my experience with the chipmunk song seems a telling testament to the true weight of much fear.  I had, by all rational explanation, no reason to be afraid, and as a 30-some year-old woman, my fear of the chipmunk song seems pleasantly nostalgic and laughable.  Might not much fear be the same?  Truly, there are things in life to be afraid of.  But so much fear is the stuff of fantasy, dreaded stories we concoct in our mind and socially acceptable delusions.  At least, that’s true for me.  Perhaps the fears that plague most of us as adults are as silly and inconsequential as that chipmunk song.  Perhaps, 30 years from now, I’ll be laughing at my current trepidations.  These are, I think, important points to consider.

7 thoughts on “What Scares Us? My First Fright (Part One) – The Insidious Chipmunk Song”