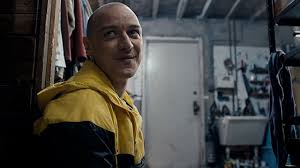 With the most unstable U.S. president to date having been sworn in today, I feel it more than apropos that I’m reviewing a story about a character who is, well, relatively unstable himself.  But rather than serve as a political statement, M. Night Shyamalan’s Split is an immersion into a morbidly formidable world that will transport the viewer – for about two hours – notably away from our chaotic political climate and the imminent danger that our country may face, and into the world of a man with DID – Dissociative Identity Disorder –a man who has multiple personalities, including a few rogue personalities bent on causing harm and destruction.  This review contains minor spoilers, but since the film is so new I won’t reveal the ending; as always, Shyamalan hits us with a barrage of surprises.

Kevin Wendell Crumb (James McAvoy) suffers from Dissociative Identity Disorder.  Indeed, we don’t encounter Kevin for much of the film, glimpsing, instead, personalities like Barry and more pernicious personalities like Dennis and Patricia.  One day—for a reason we find out later in the film –Dennis, one of Kevin’s primary personalities, hijacks a car with three high school girls in it, including class loner Casey Cook (Anya Taylor-Joy).  While the three girls are trapped in a decrepit room attached to a bathroom, they witness Kevin’s personalities—the ones who are, in one way or another, in on the scam: 9-year-old Hedwig, with mischievous eyes and a lisp, Patricia, and the fastidious, socially uncomfortable Dennis.  The girls make various escape attempts, which by and large prove unsuccessful endeavors that are punished later.

Meanwhile, Kevin—usually in the form of Barry—frequently visits his devoted psychiatrist, Karen Fletcher (Betty Buckley), a woman with a passionate interest in Dissociative Identity Disorder and a firm belief both that the disorder is very real—each personality of the affected individual is very distinct—and that individuals with the disorder possess unique powers and capacities.  Karen senses something is wrong when Kevin’s varied personalities keep e-mailing her in the middle of the night to request emergency sessions, but the wrong-doing personalities always take the stage when they meet with Karen in person, and Karen has no idea just how bad things are, how much of a crime Kevin has committed.  Eventually, Karen’s concern for her patient will lead her to his dark, labyrinthine cellar where is heinous secret unfolds.  But, does she arrive in time?  Does she escape with the girls?  For most of the film, who lives and who dies is anyone’s guess.

When I sat down to breakfast with my dad yesterday morning, he told me that of all Shyamalan’s movies, Split got the highest Rotten Tomatoes score, and Rotten Tomatoes scores, though not the only source of information, do contain an amalgam of opinions.  I have yet to determine if I agree with this assessment.  As I’ve remarked in previous posts about Shyamalan’s movies, his films are all so artistic and distinct that each one has its good points and possesses its own merit.  Out of all his films, the ones I’ve seen, I have trouble choosing a favorite.  In some ways, because of its plot, this film felt like a more typical horror or thriller than, for example, The Visit, which only turns insidious late in the film.  While the film feels like it falls neatly into the horror/thriller genre, it does not feel unoriginal.  And, as already noted, the film’s multiple surprising conclusions fulfill what has become a mandatory requirement of Shyamalan’s films: the famous Shyamalan twist, or twists.  If I haven’t stated so in previous posts, Shyamalan is nothing if not a twist-master, and I’m not talking about that old-timey dance.

As far as acting is concerned, it’s fantastic all around.  Anya Taylor Joy delivers Casey Cook remarkably—a smart but lonely girl—and Betty Buckley does a believable therapist with Karen Fletcher.  But, unsurprisingly, the real star of the show is James McAvoy, who falls in and out of divergent characters with astounding ease.  His acting is absolutely riveting.  Each of his characters—as in, each of Kevin’s different personalities—has a distinct voice, a carefully considered range of facial expressions, and his or her own set of mannerisms.  He becomes astonishingly believable, for example, as nine-year-old Hedwig, sitting cross-legged on the floor with a sly grin on his face.  Sadly, horror films rarely get consideration for the Academy Awards, but McAvoy’s stunning performance is unquestionably Oscar-Worthy.  I have become somewhat fascinated by him since watching the film.  He’s certainly no Professor X in Split!

What interests me most about the film is Shyamalan’s exploration and depiction of Dissociative Identity Disorder (DID).  I saw a play on this disorder in college but know very little about it overall.  While, in a previous post, I criticize Shyamalan’s negative depiction of mental illness (in The Visit), his careful exploration of the disorder in this film, and his inclusion of a psychiatrist who is a vocal advocate for DID patients, makes the film more about mental illness than an exploitation of mental illness for cinematic entertainment.  Indeed, Karen Fletcher argues for the stark reality of each different personality contained in the patient, pinpointing that the individual’s physiological elements, like strength or insulin production, may vary from one personality to another—a telling sign that distinct individuals are housed in a singular body.

There is always something uncomfortable about depicting mental illness as dangerous in film and television, because it proliferates a generalized assumption that doesn’t reflect reality (a scintilla of persons with mental illness are violent in any way).  While that point is worth noting, my qualms with Shyamalan’s decision are very slight; on the whole the film ends up being a compassionate depiction of Kevin’s struggle and its tremendous consequences.  Indeed, Kevin became more human to me throughout the film, after his initial kidnapping act, and especially when the actual Kevin, independent of his personalities, is revealed.  And if the scenario Shyamalan created isn’t realistic, it is, at the very least, possible.

The film, of course, raises a lot of questions.  How do you penalize someone for a crime when only 3-4 of their 23 personalities have combined to commit the crime?  Can Kevin ever be acquitted of the kidnapping on the grounds that he didn’t really do it?  How do we prevent his other personalities from doing it again?  What is the best form of rehabilitation for such a character?  And, along other lines, what is the nature of the soul?  Do we have one, and can 23 souls be housed in one body?  What is this ambiguously defined word, “personality?”  How do we determine what a personality is, and where it comes from?  As is typical with Shyamalan’s films, Split provokes considerable speculation. 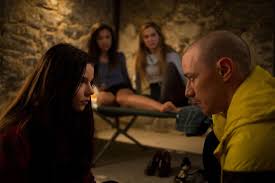 Although I said I would give no major spoilers, I’ll say this: the mood of the film throughout its duration and some of the events in the film combine to create a worldview that is notably bleaker than his other films.  If Signs is his quintessential movie of hope, Split, with its similar monosyllabic, S-name, may sit as its opposite in that it argues for an unhappy world with little justice.  As such, while you won’t leave the theater in a particularly good mood after the film, you’re sure to be amazed by the acting and left with considerable questions to ponder.

Note:  This is the post that my M. Night Shyamal-a-thon was building up to.  You can read about his other films by clicking the following links:  The Visit, The Sixth Sense, Signs, Unbreakable, The Village

3 thoughts on “Split Lives Up to Great Expectations”