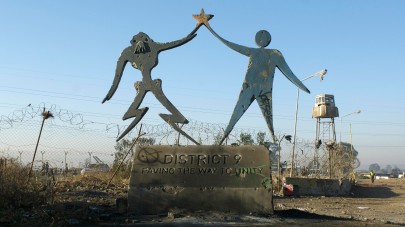 Ridley Scott once asserted that if another life form came to visit earth, it’d be best to flee immediately, because the life form’s intentions assuredly wouldn’t be good.  One the one hand, this premise seems contestable, like a sort of specie-ism that naturally pits “all against all” and relies on a narrative of innate hostility, in which the alien “other” is necessarily a dangerous, malicious being.  On the other hand, it would, presumably, be a long journey from the unknown planet to earth, and what might motivations for that journey be?  Far be it for us to assume extra-terrestrial intentions would necessarily be negative, but one can see how Scott’s line of reasoning is defensible.  I watched District 9 last night and, I think, it situates itself with a bit of ambivalence, but mostly on one side of the narrative.  District 9 suggests that an extra-terrestrial “other” who arrives on earth need only be hostile if we make them so, and even then, perhaps the alien-other isn’t as hostile as those skulking around the next corner, waiting to mercilessly obliterate him or her.
District 9 is a faux-documentary of Wikus Van de Merwe, who’s chosen to head up an initiative to relocate the alien-other from District 9, a so-called slum that arose when an alien spacecraft defected and the extra-terrestrial others were quickly corralled in an isolated, concentrated area in Johannesburg, a city that not incidentally has its own bloody apartheid history of injustice, albeit, of course, race-based instead of the injustice of an imagined extra-terrestrial other.  While Wikus is tasked with moving extra-terrestrials out of their homes into even more impoverished tents, he doesn’t realize that a larger effort is underway aimed at their extermination.  Early in the film, he injures his arm, and, after secreting black bile from his nose and contracting a fever, he starts morphing into the alien-other, first by sprouting a sort of quote-unquote grotesque appendage that replaces his arm, scares his wife, and situates him outside the realm of what society considers quintessentially human, to thus thrust him toward society’s margins.  Wikus’s fight for his life is thus a fight for his own humanity, his inclusion into the category “human being,” an individual worthy of rights and dignity—a category, the film argues through narrative, that should be extended to the alien-others, called “the prawns” in a sort of specie-ist fashion, that inadvertently end up on planet earth.

Wikus is a rather boring character at the film’s beginning.  He’s presented to us, sort of, as an incompetent bureaucratic milquetoast who delights in his new position as an alien exterminator (though, of course, the position isn’t given such a reprehensible name) but has no idea how to execute his task and appears obtuse and inept at dealing with the prawns, the alien others.  The prawns, it should be mentioned, are virtual caricatures of aliens.  With their exaggerated reptilian look, their animated eyes and funny tentacles, they’re the antithesis of scary, but they intentionally encapsulate our stereotyped, “not-human” imagining of the alien-other in all his semi-reptilian glory.  What the movie doesn’t say, but what it certainly and accurately implies, is that embodiment and physicality is a primary impetus and justification for the ostracization of the prawns; they are denied rights, dignity, and respectful treatment in part because they look different, and society adopts a discursive narrative that situates them as the hostile-other, even though – to the extent that they are hostile, at all – they’ve been made that way by a sort of world-society that didn’t know how to deal with the initial landing of the spacecraft and a general human population that cannot accept the alien-other as human, if only because of, as mentioned before, their embodiment, and perhaps their use of a language previously unknown on earth. 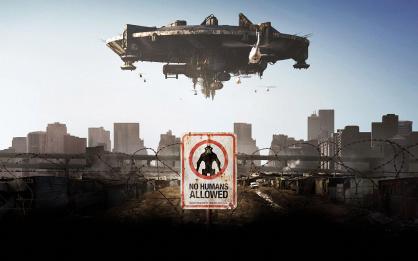 When Wikus begins his perilous transformation into the alien-other, however, he becomes an incredibly sympathetic character, and we see traces of his compassion, insight, and good judgement.  As he begins to transform into the prawn, the alien-other, his body becomes the site of what Julia Kristeva calls “abjection,” or that which we generally regard as disgusting and “not ourselves.”  Kristeva associates abjection with things like vomiting and corpses, and argues that those who are situated close to the abject are dejected from society.  As black bile comes out of his nose and scales pierce through his skin, the more sympathetic Wikus becomes both a site for abjection and thus a dejected individual.  Indeed, society strips him of his human status even as we begin to see his humanity emerging.  His wife no longer wants a relationship with him (at least, eventually) and he’s seen as fodder for experiments, a man with an arm who can operate the prawn weaponry and who can advance knowledge of the alien-other.  Upon his entrance into abjection, true to Kristeva’s assertion, he ceases to be regarded as an individual subject, and becomes a sort of “not-I,” or something humans regard as inherently different from themselves.  To that end, the film expresses a lot of tentativeness about labeling “that-which-is-human” at the expense of excluding and committing violence toward that which is not considered human.  The prawn are evidently thinking, feeling subjects in the film, but they’re discarded and disregarded the same way Wikus is when his transformation begins.  And just as Wikus evokes the dangers of creating a narrow category labeled “human,” his story similarly encapsulates the peril, the near-spasmodic trepidation society has toward that which is not considered human, and, perhaps, that with an embodiment that appears “inhuman.”  Wikus shows us, in other words, not only that we may turn into the monstrously depicted other if we work closely enough with him, but that we’re terrified of such a transformation, and perhaps rightfully so.  There are, as Wikus’s story evidences, catastrophic social consequences to such a transmutation. 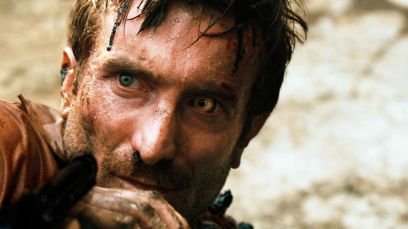 Recognition becomes a critical factor in this film, and to that end the movie becomes a story of recognition gone awry (I believe there’s a theoretical term for that called misrecognition).  In Judith Butler’s book The Precarious Life, which she wrote closely after the fall of the World Trade Center, Butler argues that American culture has narrowed its definition of “that which is human,” to exclude those associated with Islam, and all of those who died during American attacks in Afghanistan and Iraq.  Though we are inherently interconnected, or intersubjective beings, largely constituted more of the “traces” that others leave within us than of some inherent or transcendental self (which is, also, Butler’s argument), we only regard some humans as human beings, and this is a failure of recognition, or the ability to recognize the other subject as a subject, as an individual in this chain of interconnected subjectivity.  To Butler, this is evidenced through poor journalism and a complete inability to acknowledge the deaths of those lost to American attacks, even as we intensely grieve and memorialize American lives (a practice Butler is not averse to, but thinks should be scrutinized when mourning excludes other lives).

Though the scenario we have in District 9 is an inter-species scenario, the film makes the ardent argument, once again, that these alien beings are interconnected subjects, or, lives– part of society, even when humans try to oust them, and thinking, aware individuals who affect and are affected by others.  The problem is, then, a problem of misrecognition; they are not recognized as subjective selves the way “earth people” are.  And, what the film suggests, is that when misrecognition begins and festers, it sets off a violent inter-subjective reaction that creates monsters out of most of us – monsters who are embodied, in this film, in the group of security operatives trying to experiment on and exterminate the alien population with no regard for the lives of the prawn or, once Wikus begins transforming, of Wikus.  Ultimately, as in many monster movies, the “monster(s)” in this film – if we can even call them monsters, which I doubt for a few reasons – are far more human, despite their persecution and oppression, than the human beings tasked to handle the “monster” problem.  To that end, narrowing the category “human” to exclude vital and contributing subjects not only injures the oppressed subjects; it injures those who adhere to the rigid, exclusionary categorization. 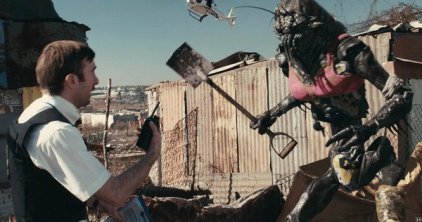 Which is to say that despite the fact that District 9 is an alien movie, at the very least, it prompts us to consider how we regard other individuals as subjects.  Indeed, it asks us if we do, and suggests consequences of doing so, or not.  If we accept arguments of the post-humanists, the category “human” is a dangerous and contentious one to begin with – a category that excludes the rights, for example, of animals, and could exclude Artificial Intelligence one day, if it becomes a reality.  Thus, while Butler argues that we must be careful to include all subjects into the category “human,” post-humanists reject the category “human” all together.  District 9 seems equally cautious and hesitant about accepting an explicitly “human” category.  Indeed, it suggests that if the category “human” is misused to exact evil and oppression, the chaos and cruelty that result could have cataclysmic, dehumanizing effects for all involved.