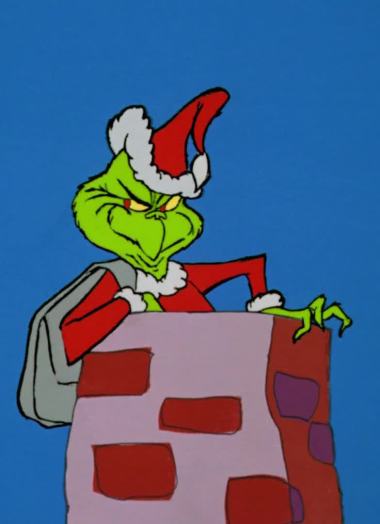 Typically on this blog, when I discuss monsters, I discuss them in the classic sense of the word.  I analyze those horrifying aberrations that upend our sense of consistency and comfort, that unsettle norms with their often hideous and hybrid bodies.  It is far less typical that I engage the reader in a discussion of a circa 1960’s childrens’ Christmas classic that’s become a staple component of the pre-holiday viewing canon.  Alas, I aim to surprise, so that’s exactly what we’re doing today.  I sat down tonight to watch the always fantastic original “How the Grinch Stole Christmas,” and was reminded of the so-famous-it’s-almost-a-cliché Milton quote: “The mind is its own place, and can make a hell of heaven, a heaven of hell.”  You see, for perception to be this malleable, I think the mind must pick out—and emphasize, or diminish—details of its choosing.  The details the mind focuses on may have some bearing on one’s perception of reality.  Similarly, the Grinch is a very different movie watching it as a child and as an adult.  Here, then, are some questions and problems my adult mind focuses on while watching “How the Grinch Stole Christmas,” along with, perhaps, some shameless fangirling over this movie made for six-year-olds.

So the question is, where to start?  Well let’s start with how gratuitously violent this “kid’s” movie is.  Violent, you ask?  Yes, I argue.  There are so many moments where I just cringe, or wince in pain, because I can practically feel the characters’ pain as I watch the film.  How about, for example, the sewing machine scene?  Little Max, the sweet, unassuming dog who gets relentlessly physically and emotionally abused by the Grinch, who’s used as a tool for the Grinch’s machinations instead of being treated like an individual, is sitting on top of the sewing machine, when the thread starts to, well, thicken, and we realize that’s because Max’s tail has gone through the machine.  How is the physical violence toward Max’s tail relevant or important to the narrative?  Simply stated, it’s not.  But every time I watch this horrific scene, I imagine, a.) What it would be like to have a tail, and, b.)  What it would be like for my tail to be threaded through a sewing machine.  Aggghhhhh, come on Ted Geisel (who helped produce the film in addition, of course, to writing the story).  Do we really have to wind the poor dog’s tail through a sewing machine just for the visual sensation it provokes?  Sick, sick, sick.

And Max, we should mention, is the recipient of the bulk of the film’s vicious brutality.  I mean, how about the scene where the Grinch ties those enormous antlers to Max’s head?  Of course, before he saws them down to size, they’re so big that Max begins to fall forward, but even after he saws them down, those suckers are practically boring a hole in the top of Max’s skull.  They’re basically wedged into his head.  I can feel the weight and intrusion even as I watch Max’s pained expression.  Which raises another interesting point: Is any reasonable Who down in Whoville really mistaking Max for a reindeer, or the green, furry Grinch for Santa Claus?  The costumes themselves seem a bit superfluous, although they are enough to trick Cindy Loo Who – the only Who who witnesses him – but probably because, well, you know, because she’s no more than two (although astonishingly bright in terms of inquisitiveness for a two-year-old, despite the fact that she buys the Grinch’s Christmas get-up).  Finally, it goes without saying that Max’s wholly unnecessary sleigh ride down that steep, snowy hill would be a small taste of hell for the poor dog, as his entire, naked body – up to and past those ridiculous antlers – is buried in snow.  Max’s life pre-Grinch reformation is a bitter one indeed, and one of the saddest,  most Russian-realist elements of the film’s allegedly light-hearted plot.

The Grinch, though, doesn’t escape the ambience of physical pain that permeates the narrative, which, of course, he – unlike Max – totally deserves, for leaving crumbs much too small for other Whos’ mouses.  (And as a sidenote, what the hell is up with that scene?  I mean, of course it’s a total dick move that the Grinch feels the need to take the last crumb from Cindy Loo-Who’s house, but the narrator tells us that he takes a crumb “too small for a mouse,” even as none other than a mouse is approaching the crumb, about to eat it.  Thus, we can infer, that the crumb is indeed not too small for a mouse, or at least not too small for every mouse).  When he’s standing on the summit of that steep, weirdly pointy mountain in the story, listening to the Whos sing joyously despite the fact that he’s not stolen only Christmas, but, presumably, has stripped every Who-house of all its interior accoutrements, he gets an uncomfortably dopey look on that green, angry countenance of his, and his heart grows three sizes.  I never know whether to be moved during this scene, or too clutch my heart and think about how quickly I’d be dead if that happened to me (I’m a bit of an anxiety-ridden hypochondriac).  In any case, at that moment, his sled full of Who paraphernalia begins to coast down the mountain, and in a rush to save it, he reaches for the entire sled containing bags full of the interior of every Who house in Whoville, and endeavors to pull the sled up the hill and lift it over his head, all by himself.  (Max, it should be noted, must be thinking, good lucky buddy, this is all you, because he doesn’t endeavor to help).  Ultimately, the Grinch is triumphant in retrieving the falling sled (presumably his love for mankind gives him super-human, or super-grinchy strength), but do you see how he sweats, and squints, and struggles as he’s trying to perform this feat?  Ugh.  I’m not completely averse to exercise, but that’s simply too much.  I cringe just watching his trials.  Every muscle in my body would ache if I tried to lift something that heavy.  And, to return to the heart motif, I’d probably have a heart attack, which is one of my greatest fears, catalogued neatly next to my irrational fear of dead fish.

Ultimately, our vicarious physical pain is relieved when the Grinch restores the Whos’ material possessions to them and they sit down to, wait, what, to carve the roast beast?  We’re still carving shit up?  I mean, this scene may seem benign enough if we focus on the countenance of the Grinch and the Whos, but it’s oddly reminiscent of the profoundly disturbing Hotel California song, in which they “stab it with their steely knives but they just can’t kill the beast.”  The scene is only really benign if we assume that the roasted beast can no longer feel anything.  And while that’s probably a safe assumption, as every element of the narrative and all of the visuals suggest, a lot of assumptions are upended in Whoville, and in the film in general, so I think it’s important that we remember that as everyone is celebrating warmly and merrily with one another, that roasted beast is getting his shit carved up.  From a post-humanist standpoint especially, one that values the lives of other living beings as much as humans, this scene is, then, highly problematic, and highly violent.

And still….still.  Despite the fact that How the Grinch Stole Christmas is both more confusing and more violent through my jaded, overanalytic,  oddly sensitive, hypochondriacal adult eyes, this piece is, ultimately, a tribute to the film, and to the Grinch, who serves the dual cultural role of reformed misanthrope and Christmasanthrope (see: Ebenezer Scrooge) and sympathetic monster: a cynical, bitter, ugly beast whose heart warms when he hears the Whos croon joyously and who becomes, like the reformed misanthrope, a lover of humanity with, presumably, a depth of emotions that warrants a cinematic sequel that we never get to experience (and let’s face it, while “How the Grinch Stole New Year’s Day” might be kind of a lame story, watching the Grinch steal Valentine’s Day and destroy all those Who-dates would be fantastic).  Ask any Christian, or any Star Wars Fan: There is nothing more appealing, more delightful, more narratively and emotionally (and even spiritually) satisfying than redemption, and the Grinch offers us that possibility.  The guy who stole the crumbs that were too small for the Whos’ mouses, just to stick it to the happy, celebratory Whos, experiences a tremendous spiritual awakening when he hears the Who-voices lifted in rapture toward a celebration of something (unnamed but implied) grander than all the presents and decorations, the tar-tinkers and gar-dinkers.  And there is something very beautiful about that.

4 thoughts on “Have a Monstrous Christmas: Part One: A Sort of Tribute to the Grinch”