There is a strange sort of titillation that comes with watching Penny Dreadful – for the first time, to be sure, but also for the second, third, or fourth time, or any time thereafter.  The show’s introduction foregrounds a juxtaposition of unusual images that mean little to the new viewer but that accrue significance as one becomes more familiar with the series.  A mosquito spasms and jilts to a stop, a crimson, blood-like liquid flows over the edges of a quaint, antique tea-cup, and the viewer is, upon seeing these images, quickly catapulted into the mid-late 19th century –into a world rife with class divisions and scientific positivism, ornate dresses and ostentatious houses – into a world with decorum, colonialism, and, best of all, naked, green-blue, thick-skinned, bloodsucking vampires.

All of this is to say not only that I enjoy the show, but that I hold Penny Dreadful close to my heart (pardon the cliché, but it’s true) as one of my all-time favorite horror television shows, an imaginative, fantastical amalgam of horror and endearment and intrigue that has yet to be surmounted, in my mind, by another television show.  All that said, though I’ve watched the show’s three-season run two, maybe three times now, from the first episode to the last, I hadn’t seen it for some time before I sat down to re-watch episode one tonight, with the intention of writing about it afterward.  Now, quite truthfully, I’m a little tired after a long day, and formulating coherent thoughts right now is a tall order, but I’m going to give this a go, anyway: here is my rambling, semi-organized, sort of patchwork assemblage of thoughts that crossed my mind when I watched Season one, episode one of Penny Dreadful tonight, with the intention of writing about it.

The show opens with Ethan Chandler (Josh Hartnett) spasmodically shooting every trinket in sight during a gun show in mid-late Victorian England.  Immediately, examinations of sexism, stereotypes of masculinity, and the sort of imperialism that justifies conquering other (nations, tribes, individuals) emerges, and Penny Dreadful showcases itself as an intelligent historical examination of popular “-isms” even as it engulfs us in the world of unbridled horror.  Ethan Chandler wears a ridiculously flamboyant, stereotypical cowboy costume, speaks with a thick Western-American accent, and describes fighting the Indians with General Custer – a series of stories, or lies, that the savvy, intelligent Vanessa Ives will de-bunk later in the episode.  In such a way, the show presents as with a Victorian England weirdly fascinated with tales of violence, bloodshed, and conquest – three elements that combine to form persistent, pervasive motifs throughout the three-season narrative.  But Chandler also projects a “tough guy” façade that masks his sensitivity and, in an act of evident indiscretion, has sex with one of his gun show’s viewer’s behind a wagon, shortly before calling her by the wrong first name.  In such a way, traditional notions of Victorian culture as asexual are immediately undercut, de-mythologizing the era, even as the show sheds light on some of its additional shortcomings and highlights Ethan’s potential for womanizing.

As Ethan Chandler is performing his antics, the camera frequently pans to the graceful, charming, fashionable Vanessa Ives (Eva Green) who sits among the audience, watching him carefully but skeptically.  Later, she tracks him to his favorite pub, where she sizes up his complex, contradictory character aloud and asks him if he’s willing to sell his services for money – if he’ll go on a sort of errand with her, a job requiring extensive, competent use of firearms.  Eva Green is positively arresting in this scene, as she continues to be in the rest of the show.  To be sure, my favorite part of watching Penny Dreadful is just watching Eva Green play the character, Vanessa Ives, who’s a brilliant, strong, gorgeous character.  But in addition to more formally introducing us to Vanessa, this scene also continues to consider the motif of violence, as Ethan Chandler agrees to be a hired gun-hand to Vanessa, no questions asked (or, at least, no answers to those questions given).  Whenever Ethan asks questions – is he being hired to commit a murder, for example – Vanessa asks, “Would it matter,” highlighting the complicated Ethan as a man in need of money, who, despite some degree of conscientiousness about other elements of his life, will use his firearm skills with readiness and indiscretion.

No doubt, Ethan uses his firearms quickly and without question for Vanessa Ives and her mysterious comrade, the until now unintroduced Sir Malcolm Murray.  The ostensibly wealthy, well-dressed duo beckon Ethan into a sequestered underground lair infested with rats –rats, and undead, naked bodies.  Here exist the vampires, the primary monstrosity of Penny Dreadful, season 1.  Penny Dreadful is a class-conscious show; while the witches in the second season live in opulence and luxury, the vampires in season one are crammed underground and, like the homeless, sleep outside; indeed, the vampires are practically stacked on top of one another in large piles, in one scene and the show’s protagonists – themselves a notably flawed group, as will be revealed later – do not think twice before killing them.  These are monsters that are able and meant to be killed, precisely because they are monsters.  With their blue-green skin and ugly fangs, they are abject non-people, beings to be fought, even exterminated. 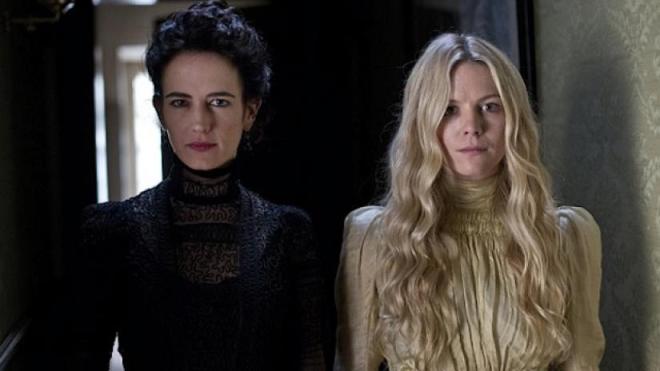 But the monster in this show – the very inhuman vampire – is also something to be examined, an object or specimen of rationalism and science.  After shooting a vampire, in a quest to find Sir Malcolm Murray’s daughter, the gang hunts down a scientist who is “not afraid to peel back the skin,” – a man with an autopsy table who will use his forceps to peel back the casing of the monster and thus dissect it, categorize it, label it.  Unsurprisingly, the vampires in Penny Dreadful initially defy categorization, though the scientist, Victor Frankenstein, likens the monsters to an animal when he describes the monster’s skin as “more of an exoskeleton.”  When the group finds hieroglyphics beneath the monster’s exoskeleton, they visit a professor of Egyptian studies, who they ask to decode the monster, to unravel the words written underneath the monster’s skin.  He offers to do so, but not right away, and indicates only, when the group is about to leave, that the message is from the Ancient Egyptian book of the dead.

More could be said, to be sure, about the episode one, and the show in general.  As the season unfolds, the writers are sure to emphasize how flawed our wealthy but tormented characters are, how fraught their pasts are – all signs which point toward highlighting the limits of wealth, in Victorian England or, presumably, now.  After all, Sir Malcolm Murray’s daughter Mina is gone.  True, he can use his money to hire vampire-killing assassins and scientists to study bodies of the vampire specimen (indeed, he sends a fancy suit to Victor Frankenstein’s house and asks Frankenstein to meet him at his club when he wants to recruit Frankenstein as an official member of the team).  But as the viewer watches the first episode, and the rest of season one, the success of Malcolm’s efforts, the effectiveness of money, science, and learning in helping him re-claim his daughter, are all points of contention.  And as the wealthy, former explorer is devising a group to hunt down his daughter, the less wealthy, introverted, slightly awkward Victor Frankenstein is similarly traversing the boundary line between life and death, working day and night to bring a human being back to life.  He is, along those lines, as energetic and ruthless as Sir Malcolm and the rest of the crowd. 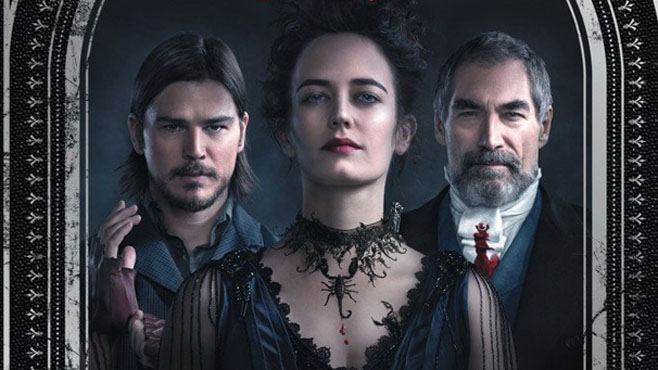 Indeed, the slightly corrupt but relatable characters of Penny Dreadful have perseverance, but to what end?  If Vanessa and Malcolm are trying to erase consequences of their past actions – which the show insinuates – can they really do so?  Are conquest and exploration (on land, in the sciences, wherever) –really effective when you’re trying to defeat vampires and win your daughter back?  Episode 1 of Season 1 raises these questions, questions that will be explored, assiduously, as the season progresses.