For my dissertation right now I’m writing a chapter on Psycho.  I’ve written about Psycho on this blog, and I think it’s a fascinating work, but my study of the film led me yesterday to some interesting musings about American Horror Story Asylum: 2, a tv show that takes the slasher phenomenon head on and, arguably, indicts the lineage of violence that provoked it.  Psycho and AHS Season 2 are remarkably and intriguingly different, and I will examine their differences more in this blog post.

END_OF_DOCUMENT_TOKEN_TO_BE_REPLACED 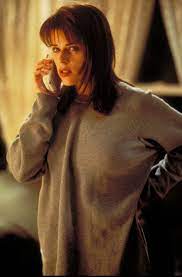 I don’t remember how many horror movies I’d seen when Scream first came out in theaters, but I’d probably watched at least Kubrick’s The Shining and Coppola’s Bram Stoker’s Dracula – the first two horror movies I recall seeing – in the tiny t.v. room of my family’s old house on East Gore Road before settling down in the theater to see Wes Craven’s post-modern masterpiece.  The original Scream came out in 1996, when I was twelve years old.  I don’t remember the “build-up” to the film the way I remember the anticipation preceding, say, the 1999 film The Blair Witch Project (and my concomitant let-down when I was less than scared by the film), but I definitely remember the general reaction to the shockingly grotesque introduction that the film provides.

END_OF_DOCUMENT_TOKEN_TO_BE_REPLACED 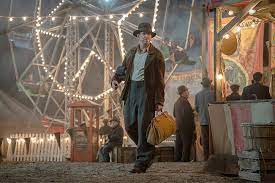 I am writing about the unsettling new Guillermo Del Toro film at 5:22 a.m. on Christmas morning because after an eight-month hiatus, it’s the only time I’ve been able to set aside for any reasonable amount of “extra” writing or “pleasure” writing.  I haven’t slept all night, because for the first time in a long time, I’m setting the day aside (Christmas) to do whatever I’d like to do, among and between zoom calls and visits with people and things of that nature.  It is a fitting reflection of my life, I think, that I plan on writing about deceit, manipulation, murder, and our innate fascination with “difference,” vaguely signified, at 5:30 a.m. on Christmas morning.  Indeed, if I had a definable brand, I think this post would reflect it quite clearly.

END_OF_DOCUMENT_TOKEN_TO_BE_REPLACED

Not all monsters are evil, to be sure. But we often assume they are. My dissertation, and thus my primary work of scholarship right now, focuses on monstrosity, but monstrosity and evil often correlate in pop culture representations.  Shortly after I started my blog, when I was a neophyte blogger and had not yet entered a PhD program, I had a profound interest in cultural manifestations of evil: who do we call evil, who gets to make that decision, what are the consequences of the word “evil,” and how do we navigate the fine line between excusing evil and seeking to understand it? Nurse Jude, played by Jessica Lange, says with her usual self-assurance in Season Two of American Horror Story, “All monsters are human.”  At the same time, writer Stephen T. Asma, in his book On Monsters, highlights the precarious nature of assuming a correlation between monstrosity and innate evil with his concept of “accidental monstrosity,” a phrase he uses to describe those who, after a slip and a slide in the wrong direction, become monsters without meaning to.  Monstrosity and evil, in any case, have one thing in common: both are massive umbrella terms that encompass multiple gradations and examples within their denotations.

END_OF_DOCUMENT_TOKEN_TO_BE_REPLACED

Before I started studying horror as a path toward getting a doctorate, I’d never heard of Tod Browning’s Freaks.  In fact, I’d only vaguely heard of Tod Browning.  I’d seen his 1931 rendition of Dracula, featuring Bela Lugosi, one fall night quite a few years ago, when Tinseltown was doing a double feature of Browning’s Dracula, followed by the far superior Spanish version of the film shot the same year (on the same set, but at night, with a different director).  I suppose back then I thought of myself as a bit of a horror connoisseur, but perhaps I was basking in my own ego – and that ego was eclipsing all my knowledge of what I didn’t know.  Because what I’ve learned since I started reading about horror is that Tod Browning is considered a central auteur in the horror field.  In terms of horror cinema, he’s easily one of the genre’s founders, and with good (varying) reasons. END_OF_DOCUMENT_TOKEN_TO_BE_REPLACED

Warning: Because of the film I’ve decided to talk about, the following subject matter will be unavoidably uncomfortable and dismal. Second Warning: If you’ve not yet seen Midsommar and you want to see it, well, first of all, get to it 🙂 (it’s free on Amazon Prime), and second, you may encounter some spoilers. Okay, you’ve been warned, onward: END_OF_DOCUMENT_TOKEN_TO_BE_REPLACED

Michael and I were just sitting around on a slow Saturday afternoon, without much on the agenda.  While horror movies tend to be night-time fare for us, the feeling of an afternoon movie on a warm June day just sort of says summer vacation (present summer vacation for me, imminent summer vacation for Michael), so we decided on a 12:10 showing of Ma.  My excitement about the film was considerable, but my trepidation about the film regarded the possibility that all of the really shocking, provocative elements of the film may have already been showcased in the trailer – I thought.  I was prepared – similar to the situation I experienced with Brightburn –to see a film that didn’t offer much beyond the preview attractions.  And while it is true – we get a glimpse of a lot of gore before the movie – there’s so much more to the film than the previews indicate, and Octavia Spencer captures a complex, layered, troubled character with unquestionable perfection.  It’s hard to call Ma the best horror movie of the spring, with gems like Us and Pet Sematary gracing the screen, but it can certainly compete.  As a heads-up, I have all but given up on writing spoiler-free reviews, so my apologies, but spoilers will abound in this piece.

END_OF_DOCUMENT_TOKEN_TO_BE_REPLACED

Well, the long-awaited evening arrived.  I’d been looking forward to Brightburn with at least tenuously high expectations since Michael told me about the premise oh-so-many-months ago.  The film’s situation sounded fascinating – an inversion of the Superman mythos, in which Superman is embodied in an evil 12-year-old child – and the previews looked plenty scary.  Couple that with the fact that I really like Elizabeth Banks – and she’s one of the main forces behind Shrill, a show I’ve been singing the praises of a la twitter for months – and this was definitely a film I had to see when it came out.  “How about we see it Saturday” Michael suggested sweetly.  I replied, “I’m going on Thursday night when I get off work, whether you go with me or not.”  So, I’m not quite sure if I would have put my money where my mouth was – I don’t go to the movies alone much, and I hadn’t asked anyone else along – but luckily, Michael capitulated, and after a quick four hour shift at Torrid, I met him at the coffee shop across the street and we zipped to Tinseltown, where we were two of six people in the theater to see one of the first screenings of Brightburn.

END_OF_DOCUMENT_TOKEN_TO_BE_REPLACED

It is just a screen.  I tell myself.  Nothing but some actors playing out a ghost story on the screen.  You’ll be 35 years old in a couple months—you can do this.  My self-assurance slowly lapses into condescension as I secretly lambast myself for being so afraid.  After all, do I not write on a horror blog?  Am I not focusing my dissertation on some element of the horror genre?  Some of this stuff is, indeed, second nature to me –werewolves and vampires have never scared me, and I’ve seen The Shining at least fifty times by now—but something about a well-made ghost movie, one that I haven’t already watched on repeat, really has the ability to de-stabilize my zen.  With the right directing and producing – the appropriate manufacture of jump scares – I can find myself fighting the urge (and sometimes giving into the urge) to cover my ears and eyes as I’m watching a particularly suspenseful horror film.  It’s rare that I react this way, but it does occur—which, I might mention, is another reason I love the horror genre.  For as many of these films as I’ve seen, the right one still has the power to scare the $#!+ out of me.

END_OF_DOCUMENT_TOKEN_TO_BE_REPLACED

One of my favorite scenes in Stanley Kubrick’s The Shining is a two or three second shock during which a series of terrifying events happen.  At this point in the film, Danny has been replaced by Tony, who’s saying “Redrum” in a voice that’s robotic at first and amplifies in intensity and urgency as Jack’s presence gets closer.  As Danny—or “Tony,” his psychic alter-ego—screams “Redrum,” Wendy reads the words backward in the mirror.  The camera pans in on the word “murder” written in childish handwriting with blood-red lipstick.  Almost as soon as we, the viewers, read “murder” in the mirror, we hear the unnerving sound of an ax chopping through wood and the camera moves to Jack, who wields the huge, sharp, silver device and uses it to slice through the wooden door of the caretaker’s quarters, where Danny and Wendy reside.  As if this nexus of sensation weren’t enough to alarm us, the viewers, and pull as even a little more deeply into The Shining’s sinister, unpredictable world, Wendy’s voice intercepts this moment with a simultaneously frenetic and bone-chilling scream—a scream that we’ll hear different variations of for the rest of the movie.  In turn, we, as the viewers—at least a little bit—start feeling Wendy’s maddening fear, and our cognition is ultimately forced to accept a mis-en-scene and narrative moment that’s eliminated anything reassuring or comforting for us to latch onto.  We are, in a sense, in the void, and we are there with Wendy.

END_OF_DOCUMENT_TOKEN_TO_BE_REPLACED

Understanding ourselves and the world we live in.