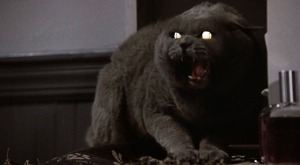 Mary Lambert is no Stanley Kubrick. At least, that’s the contrast that comes to mind when pitting the film against another classic: it seems natural to compare two of Stephen King’s terrifying film adaptations, Pet Sematary and The Shining. While Stephen King reportedly didn’t like Kubrick’s adaptation of The Shining, the movie received broad acclaim and has been frequently canonized as a horror film classic. Just as frequently, Pet Sematary is excoriated as a poorly pieced together film with sub-par acting. To an extent, I agree; The Shining is a better film than Pet Sematary. But I don’t mean this as a shot at Pet Sematary. Few directors can compete with Stanley Kubrick. And frankly, while I like the acting in The Shining better, I think Pet Sematary is the scarier movie. Which brings me to my goal in this post: I intend to defend Pet Sematary against its detractors, and obviously the defense will contain massive spoilers. While, true, the acting in the film could be better, the film contains enough darkness and terror to satiate the most jaded horror fan.

The film begins with a shot of the pet sematary and eerie kids singing in the background – maybe a little cliché. And yes, the acting is strained. At some points, it seems like the actors and actresses are trying too hard; at other points, it seems like they’re not trying hard enough. But unlike Kubrick’s version of The Shining, the movie Pet Sematary matches the book on almost all points. The only difference? Louis’s internal thoughts are more developed in the book, the book takes a tediously long amount of time to get to the action, and we meet Judd Crandall’s wife, Norma, who we never see in the movie. If anything, Pet Sematary should be commended for pairing down some of the excess in King’s book while staying true to the overall vision of the story.

So why is Pet Sematary scary? Even the film, which cuts to the chase much more quickly than the book, eases us into the horror with the death of Church, the cat. Louis Creed has moved to Maine with his wife, Rachel, his daughter, Ellie, his son, Gage, and the family cat, Church, as the new doctor at the University of Maine. Alas, the family house is situated next to a busy highway frequented by pick-up trucks, and Church gets maimed by a passer-bye fairly early on in the film. Even this part of the film is grotesque; Lambert didn’t have to include a shot of Church’s corpse, but the viewer gets a disconcerting glimpse of Louis Creed prying Church’s frozen, flattened, sticky body off the frost-covered grass. The scene was just disgusting enough to weird me out, without transgressing the unspoken horror movie threshold between film-enhancing gore and needlessly grotesque, disgusting content (take Eli Roth films, for example).

But, it only gets better.

Jud Crandall – an old man and friend of Louis, who looks creepy in the film – directs Louis to a hidden lot behind Pet Sematary where Louis can bury Church. The tract of land is an old Micmac Indian burial ground, which is unsurprising and arguably uncreative since Indian Burial grounds are the cause of much fright and distress in horror films (in, for instance, The Shining, Poltergeist, and The Amityville Horror). What Judd doesn’t tell Louis is that Church will rise from the dead because of his burial location, and Church – who was a sort of disturbing, glowey-eyed cat to begin with – is scary, and allegedly smelly, when he crawls out of the ground to rejoin the Creed family. While the hissing, green-eyed beast is menacing, he isn’t nearly as unnerving as some other elements of the film.

Lambert brilliantly throws us right into the Victor Pascow story line. Without so much as a pause, she transitions us from a peaceful scene to the vision of a half-dead, blood-soaked body. On Louis’s first day at the University of Maine, a truck hits jogger Victor Pascow and fellow students carry him to the medical clinic. Pascow looks just dreadful (haha, like what I did there?) A good chunk of his skull is hanging loose, awkwardly attached to the rest of his head, and when he speaks to Louis he spews blood. He laboriously spits out, “Louis….the soil…..of a man’s heart…..is…..stonnnnier.” Meanwhile, his eyes are wide and aghast. The scene is mortifying, but the scariest element of the Victor Pascow story line is the constant reappearance of this bloody-headed ghost. Sure, he means well, and he tries to keep Louis out of the Micmac Indian burial ground, but he and his hideous head tend to show up unannounced, startling the viewer. Pascow is most prevalent toward the end of the film, and he does get less scary the more he appears on screen, but to me, this is horror at its best: an unsettling ghost appearing, unannounced, in the maimed state he died in. And yet, there remain scarier plot elements than Victor

Rachel is haunted by memories of her sister, Zelda, who died a painful death from spinal meningitis when they were children. Really. Just type spinal meningitis into google images, and Zelda’s picture comes up; she’s her own category. Zelda looks  horrifying. She’s depicted as malicious and clinically insane because she’s so antagonized by her illness, her face is bony, her back is twisted, and her voice is scratchy in Rachel’s memory as she calls for Rachel, crooning, “Raaaaachelllll.” The film shows Zelda’s death, and she reappears toward the conclusion, as Rachel is making her way through Judd Crandall’s house. Frighteningly, she shows up when you least expect her presence, and performs petrifying feats like sitting straight up in bed – which someone with severe, debilitating spinal meningitis cannot do – and bellowing, “I’m coming for you Rachel. And this time, I’ll get you.” I was young the first time I watched this film — probably about 13 — and Zelda horrified me. Honestly, she still does. I find myself closing my eyes when I know she’s coming.

All of that terror exists outside of the main plot line: Gage’s death, and Louis’s decision to bury Gage in Pet Sematary. Lambert uses apt discretion when Gage’s death is filmed by not showing us the gory details. But the filming is brilliant; the day is beautiful and the family is having a picnic. The scene is a depiction of solace and serenity, until Gage runs out into the street and an oncoming truck hits him. All Lambert shows us is his shoe on the side of the road, which I call a tasteful decision. The first dark twist in the plot comes during Gage’s funeral, where Louis gets in a fight with Rachel’s father and knocks the casket over. In the midst of something as gut-wrenching as the unexpected death of a two-year-old, a fist fight erupts, and the viewer can see Gage’s small hand as the coffin lid opens.

Rachel and Ellie go to Chicago to visit Rachel’s parents, and in his grief, Louis buries Gage in the Micmac burial ground behind Pet Sematary. Yes, creepy Victor P. shows up on the scene many times warning Louis not to do it, and Judd has already told Louis a dark, disturbing story about a war veteran who was buried in the Micmac ground and came back as a destructive, near-zombie (another fantastically creepy part of the movie) but Louis buries Gage at the Pet Sematary anyway.

Gage returns as a terrifying mini-murderer. With a scar on his head, his funeral clothes on, and a pale face, he returns from the dead, steals Louis’s scalpel while Louis is sleeping, goes across the street, and murders Judd Crandall. Rachel comes home from Chicago, and he murders her, too, but not without asking her if she’ll play with him, in a deceptively innocent voice.  Perhaps the terror of Gage rests in his intelligence when he comes back from the dead; not only is all that made him human gone, and not only is he focused on killing people, but he’s strategic and effective at doing so.  He is able to outsmart the adults that cross his path.  A different version of Gage does not come back from Pet Sematary; something twisted and evil comes back in Gage’s body, which raises the question: where is Gage’s soul?

Louis eventually finds the bodies, manages to fill a syringe with poison, and injects Gage so he’ll die, but not before a lot of blood is shed. The only campy part of the film comes when Louis decides to bury Rachel in the Micmac grounds, and she comes back from the dead with a knife in her hand. One eye is missing and her face is oozing, which sounds scary but is really just overdone. This part of the movie could have been scarier. The film cuts out right as Rachel’s moving the knife toward Louis, letting the viewer infer the rest.  In any case, I can forgive this minor failure; on the whole, the movie is a morbid celebration of the twisted and macabre.

Aside from Victor, Zelda, and Gage, Missy Dandridge, the family’s housekeeper, kills herself because she has cancer, and the film starkly shows her goodbye note, the hanging, and her funeral. Even the subplots of this film are dreary, depressing, and morbid.

All of this is to say that Pet Sematary is a dark depiction of life; I’d watch The Shining if I wanted a lighter horror night – or, better yet, Carrie. But horror movies are supposed to take the viewer to the darkest corners of existence and explore the sinister energy that lurks there. Pet Sematary does this perfectly. The mutilated ghost of Victor Pascow becomes the story’s only hero, and with the exception of Ellie, everyone dies a brutal death. Significantly, Ellie wrestles with death as a concept throughout the entire movie, making the death of her entire family even more horrific for her.

Everything about this movie is ominous. I watch a lot of horror, and this film affects me more than most. What the film lacks in acting, it makes up for in sheer, straightforward moments of fear. Without question, Pet Sematary goes down as a horror movie classic. Word on the street says Guillermo Del Torro would like to direct a version of the film; I wonder if his vision of the story would be as disturbing.